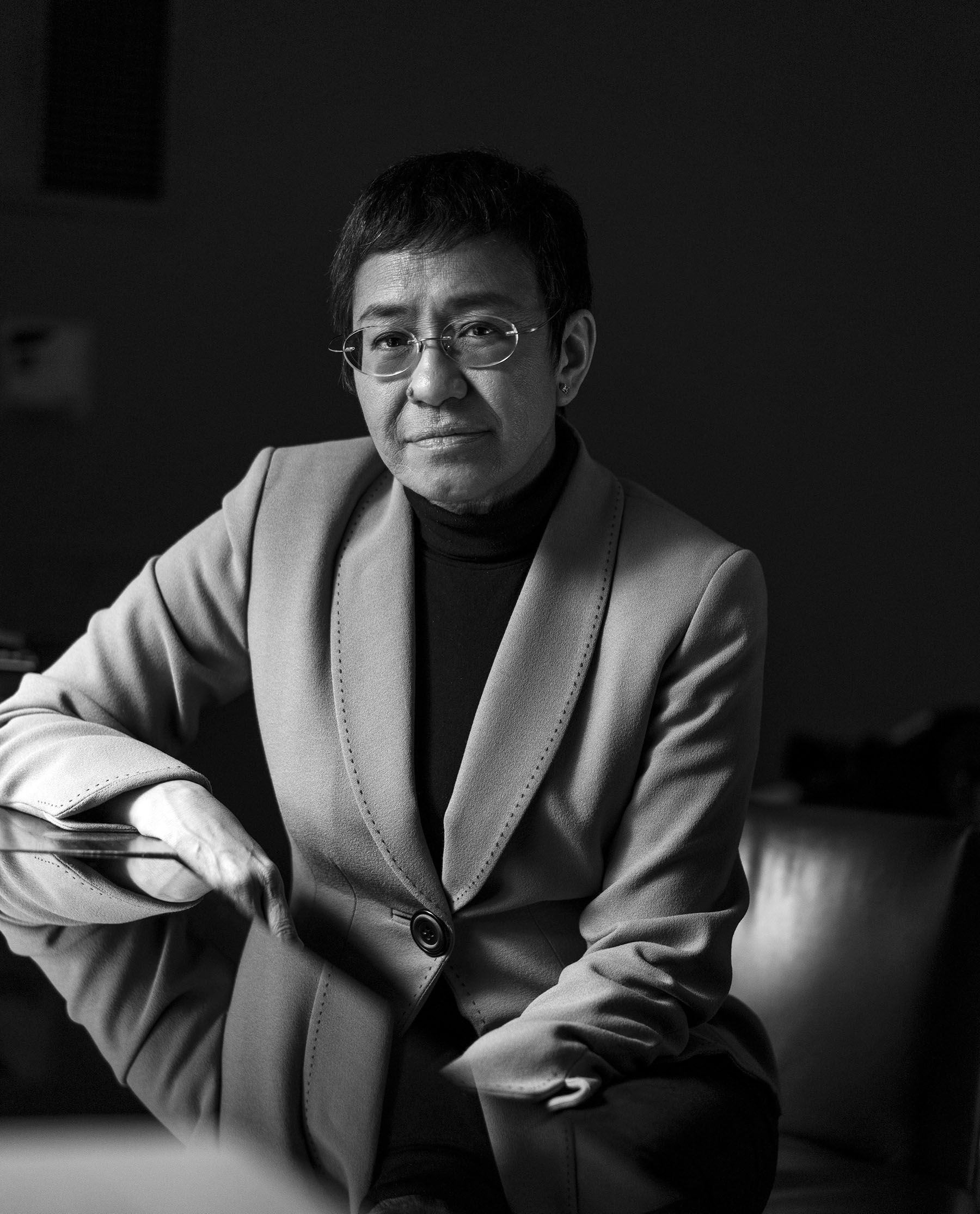 It was February 13, 2019. I was having a meeting in the offices of Rappler, the news site I helped create, when Beth Frondoso, who heads multimedia, burst into the room. She looked agitated. Our space is open, with glass walls, and I was sitting with my back to the office. I turned around and saw Glenda Gloria, our managing editor, walking hurriedly toward a group of men. “Turn around, Maria,” Beth said. “They’re here to arrest you.”

My stomach sank. I thought for a moment, then laughed. (That’s how I cope.) The Philippines, where I live, is in crisis: since June 2016, when Rodrigo Duterte became president, there have been some 27,000 killings as part of his “war on drugs.” That number comes from the United Nations, but it hasn’t been widely reported—the police keep their own, lower tally, which they pressure news outlets to publish. Duterte, the first politician in my country to have used social media to win an election, wages a relentless campaign of disinformation—patriotic trolling—to pound critics into silence. His administration spews lies so fast that the public doesn’t know what reality is anymore. Even government officials get confused.

Seven years ago, Rappler had published the story of a former chief justice who had used a bulletproof car belonging to a businessman linked to a murder. Now the businessman was filing a cyber-libel charge against us—for an article posted four months before cyber libel had been made a crime. The head of the police’s cybercrime unit threw the case out, but a week later, his decision was overturned.

The agents coming to arrest me had timed it perfectly. I looked at my watch: it was 5:30pm; the courts had just closed. But there is a night court, I knew, and it would be open until 9pm. Glenda negotiated with the men to wait for our lawyers.

Manila traffic does not move. It took us an hour to get to the National Bureau of Investigation. When we arrived, we were told to wait—the agents were taking a dinner break. After 10 minutes, I turned to my lawyer. “We should just go in,” I said. “They’re running out the clock.” So we did.

Then my lawyer got a phone call from the night court: “I don’t have jurisdiction,” the judge claimed. It was 10 minutes to 9pm, which meant that I would be detained for the night. This was the veneer of due process, used to ridiculous effect. They fingerprinted and processed me; saying that they would treat me well, they kept me in a conference room with an officer stationed outside. My colleagues (bless them) and our lawyers asked to join me. The agents were endlessly polite: “Ma’am, we’re only doing our jobs.”

Outside, people were protesting. I got some sleep, maybe two or three hours. I can sleep anywhere when I’m really tired. As I drifted off, I thought: The more they do this, the more I have firsthand knowledge of how power is abused. The more they try to intimidate me, the more certain I am that I must keep fighting.

I was born in Manila, and when I was about 10 my family moved to New Jersey. I could have stayed in the United States. But after college, I won a Fulbright that brought me back to the Philippines. I never left the region again.

It was the late eighties when I started my career as a journalist, covering Southeast Asia’s transition from authoritarian rule to democracy. It’s bizarre now to think of the euphoria then. The Philippines coined the term “people power,” with demonstrators filling the capital to peacefully oust a violent regime. The movement spread: to Thailand, to South Korea, to Indonesia. Working for CNN, I chronicled the political transformation as it was unfolding.

Decades later, I’m in shock about what’s happening to my country. We are walking back to rule by hostile dictator, witnessing the erosion of our freedoms, becoming accustomed to murder. In the Philippines, 97 percent of people are on Facebook— Facebook is our internet—so as Duterte’s administration and its proxies astroturf social media with propaganda, a lie told a million times becomes the truth.

Duterte also attacks journalists directly. First, he came for the Philippine Daily Inquirer, the largest English-language paper, filing cases against its owners. Then Duterte went after ABS-CBN, the largest media conglomerate in the Philippines, threatening not to renew its franchise. Rappler was his third target. In July 2017, during Duterte’s State of the Nation address, he declared that Rappler was “fully owned by Americans.” This is not true; in fact, the largest group of shareholders is Filipino journalists. I tweeted: “President Duterte, you are wrong.” A week later, we received our first subpoena.

In January 2018, the government announced that it would revoke Rappler’s license to operate. We fought back, but the attacks have been overwhelming. In 14 months, 11 cases and investigations have been filed; this spring, I posted bail eight times; over a five-week period, I was arrested twice.

When I awoke on Valentine’s Day, the NBI asked me to join an official press conference. I refused, demanding to be brought to court so I could post bail. That didn’t happen until the afternoon. When I left the building, I was angry. But as I walked through the door and saw a crowd of reporters, I pushed the anger down and smiled. This is weaponization of the law, I told them. “I’m appealing to you not to be silent.”

Later, Salvador Panelo, the president’s spokesman, gave a statement: “I think she’s enjoying it. She’s been smiling all the while.”

My rights continue to be violated. Legal hassles can take up 90 percent of my time; a day after our May midterm elections, I was arraigned for cyber libel in the morning and appeared for a case of securities fraud in the afternoon. Duterte has barred Rappler journalists from covering any of his events; at a campaign rally, his agents sought out and expelled our reporter. In response, we filed a case at the Supreme Court, the first against this government for stifling press freedom.

Unfortunately, we have a court mostly installed by Duterte—by the time he leaves office, he will have appointed 13 of the 15 Supreme Court justices. But it’s our court of last appeal. The only way we can hope to get a fair trial is if others are watching.

Has America ever needed a media watchdog more than now? Help us by joining CJR today.
Maria Ressa is the CEO and executive editor of Rappler, a news site based in the Philippines that she cofounded in 2012. This year, she was named a recipient of the Nobel Peace Prize.

A World of Trouble

The Death of Supply Column 21

Life on a Leash

The FBI and Me

The Bodies Counted Are Our Own