Leah Parsons was only 13 years old when she invented the name that would echo across Canada years later. Her niece Heather had come over to play, and Parsons started to toy with her name, arranging and rearranging the syllables.

Heather. Parsons mused over the word, then repeated it backwards. Rehtaeh.

“I thought, ‘Oh, that’s kind of neat. I think if I ever have a little girl, I’m going to name her Rehtaeh,” Parsons said in a recent phone interview. Sixteen years later, Rehtaeh Parsons was born.

In 2011, Rehtaeh Parsons, then 15, was allegedly gang-raped. A photograph of her abuse circulated throughout her hometown in Nova Scotia. The torment drove her to suicide two years later. Media worldwide flocked to tell her story.

Now, though, as two male defendants in the case face charges of child pornography for allegedly photographing her abuse, Canada is seven months into a publication ban that forbids printing Rehtaeh Parsons’ name. And that ban–part of Canadian law intended to protect victims during court cases, is now doing the opposite, Parsons’ parents say.

Many news outlets agree, and on Monday, The Chronicle Herald became the first major paper in the country to break the ban. 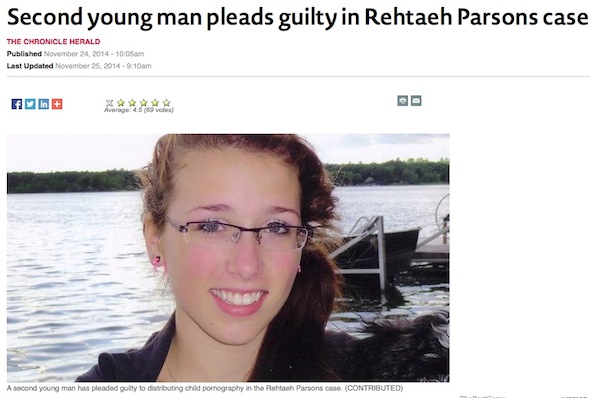 “We believe it’s in the public interest in this unique case, given the widespread recognition of Rehtaeh Parsons’ name, and given the good that can come, and has already come, from free public debate over sexual consent and the other elements of her story,” read an editor’s note on the piece.

It’s the latest move in a media fight that has turned Rehtaeh’s name into a symbol of the tension between the Canadian legal system and social justice journalism. And it’s a tension that reveals the peculiarities of Canadian media law, especially compared to its less restrictive neighbor to the south.

American journalists can publish almost any information they legally acquire, even if that information violates a victim’s privacy. The First Amendment reigns supreme. But in Canada, constitutionally protected free speech has only existed since 1982. And even so, that freedom is subject to “reasonable limits.” Criminal cases can be subject to a series of publication bans, prioritizing privacy over free speech.

Accordingly, anything that could link Rehtaeh to the child pornography charges–her name, her face, even her parents’ identities–is now strictly off-limits.

“There’s no purpose. It certainly isn’t protecting my daughter,” said Glen Canning, Rehtaeh’s father. “All my daughter had, at the end of the day, was her voice. And they’re even taking that away from her.” He encourages reporters to disobey the ban.

Canadian publications were equally adamant that Rehtaeh’s name remain in the news. Last May, four Canadian media outlets even challenged the publication ban in court. But while Judge Jamie Campbell acknowledged Rehtaeh’s “quasi-celebrity status,” he argued his hands were tied. Canadian law is clear: Anything identifying a child pornography victim cannot be published.

The section of the Canadian criminal code concerning child pornography “assumes that there can’t possibly be a case where anybody would want the person to be identified,” said Daniel Burnett, a Canadian media lawyer. “And yet, sometimes identification is the most important public lesson.”

In Rehtaeh’s case, media around the world must now decide whether or not to defy the ban, essentially entering into a game of chicken with the Canadian justice system. In Canada and in the UK, laws state that publication bans include the entire world, not just the country issuing them, said Charles Glasser, another media lawyer and consultant to content providers.

Halifax Regional Police said in late November, just before the Chronicle Herald broke the ban, that it would not pursue charges against ban-breakers, but it did not rule out future prosecutions.

In Canada, the Rehtaeh Parsons story is now known euphemistically as a “high-profile child pornography case.” But publications continue to struggle against the ban, in part by appealing to the audience’s sense of curiosity.

One freelancer created the evocative hashtag #YouKnowHerName. Soon after, both the hashtag and Rehtaeh’s name were trending on social media. Other media outlets are even more direct in guiding their audiences to Rehtaeh’s identity.

This system partially relies on foreign media’s continued flouting of the publication ban. The internet puts foreign media and the banned content it carries mere clicks away from Canadian consumers. American publications like Slate and the Huffington Post all continue to use Rehtaeh’s name.

“Unfortunately, in the United States, we tend to overdo it, and sometimes the fact that you can publish something legally overtakes the moral question of whether you should,” Glasser said. In the recent Steubenville rape case, for instance, major networks like MSNBC and Fox News aired the name of the victim. Just like Rehtaeh, the Steubenville victim was also photographed while being violated.

Keeping Rehtaeh’s memory alive, though, is done in the public’s interest, her parents said. They point to the cyber-bullying legislation Rehtaeh inspired at both provincial and national levels.

“The awareness that’s been spread and the change–that happened because there’s a face with the story,” said Parsons. “When you take that away, it almost cuts off the conversation.”

Has America ever needed a media watchdog more than now? Help us by joining CJR today.
Allison Griner is a freelance multimedia journalist currently based in Beijing. Her work has appeared in Al Jazeera Magazine, Esquire, and The Washington Post. Follow her on Twitter @alligriner.

TOP IMAGE: The Chronicle Herald became the first major paper in the country to publish her name