Editor’s note: The name of the concentration camp that Lee Miller visited was corrected in this version.

We don’t take any special notice these days when we see a woman’s byline on a news dispatch from a war zone or a female face on a television report. We just accept the exceptional coverage of a Carlotta Gall from Afghanistan, a Martha Raddatz or Christiane Amanpour from, well from anywhere.

It was, of course, not always that way.

As milestones of World War II are commemorated this month, it is worth remembering that the war, especially the European theater, provided a significant barrier-breaking opportunity for female war correspondents and photographers.

The war gave us the splendid Marguerite Higgins, Clare Boothe Luce, Martha Gellhorn and several other correspondents who went on to be postwar writers and journalists of renown.

Margaret Bourke-White, who took pictures for Life, was the most famous of the very small corps of female war photographers. Many of their memorable shots were of helpless civilians left stunned and crushed as history rolled over their lives.

For me, one of the most arresting frames of war depicted one of those photographers herself — the camera turned back on the observer. It is a photo, carefully staged it would seem , of Lee Miller, an accredited war photographer, taking a bath on April 30, 1945. It is a picture of a beautiful woman in a mildly intimate situation but that is not the central appeal of the picture. It is that she is bathing in Hitler’s Munich apartment. 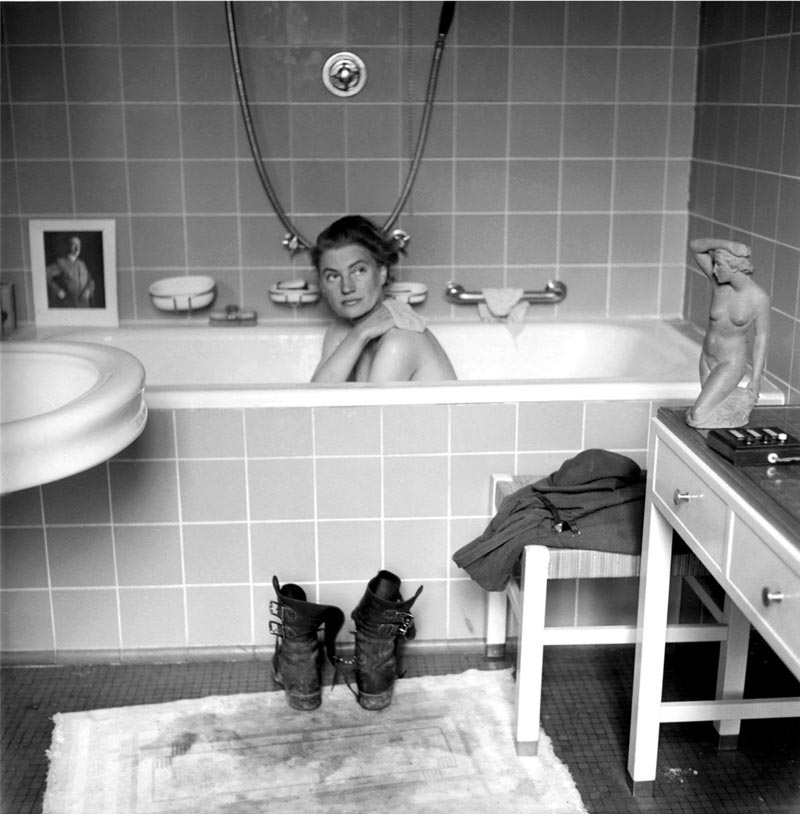 And, as we would later learn, the photographer was David Scherman of Life magazine, who was her lover and also Jewish. They’d happened upon Hitler’s abandoned apartment and camped out there for several days.

On the ledge of the tub is a framed photograph of Hitler. On the small table outside the bath is a device that he used to summon his aides. And in the foreground are the boots Miller wore that day and nearby a masculine wristwatch atop the military clothes she shed.

She appears inattentive to the camera and her shoulders are shyly rounded as if to shield her nakedness. It is a contrived coquettishness as by then she had posed for hundreds of completely nude photos.

It is a confluence of elements people might casually and unknowingly describe as surreal. Lee Miller was, in fact, trained and accomplished as a surrealist photographer. She learned both the composed symbolism of the genre as well as the more workmanlike skills involving light and composition from Man Ray, the celebrated avant-garde artist. She was initially a model for him in Paris and then his lover and eventually his student.

Lee Miller was born in Poughkeepsie, NY, and as a young woman was a successful fashion model in Manhattan. She eventually decided this was a dull way to spend her time and she made her way to Europe. When war broke out she got herself accredited as a combat photographer for Vogue magazine. She took photos of, among other things, the battle for Alsace, the liberation of Paris, the use of napalm in the battle of St. Malo and survivors of the Dachau concentration camp.

If she seemed the glamorously adventurous woman who lived life fully, she was. She counted among the lovers she took Charlie Chaplin and Pablo Picasso, according to biographers. She eventually married Roland Penrose and became Lady Penrose, living in rural England. If that suggests she was someone who had accepted a tame country life, she wasn’t. Roland Penrose was himself an artist and a bohemian.

Her biographers, which include her only son, depict her life as an unfettered one.

But she eventually became depressed and dependent on drink. Some, including the son, Antony Penrose, speculated that she suffered from what would become known as post-traumatic stress.

Antony Penrose said his mother was generally unpleasant and unhappy during her later years, a distinct contrast to her time during the war, when she was described as unfailingly kind and sympathetic to those around her, be they soldiers or refugees. It may have been simply that she found everything after the war unbearably dull.

Maureen Dowd, a longtime friend of mine who had been a colleague in the New York Times Washington bureau, had always taken a great interest in such bold women of an earlier time, so I was curious if she knew of Lee Miller. I should have known the answer.

She had, in fact, long been greatly intrigued by Miller. And when in Iraq after that war, Dowd did something to pay tribute. She was traveling with Defense Secretary Robert Gates along with The Times’s Pentagon correspondent at the time, Elisabeth Bumiller.

When the entourage visited a U.S. military facility that had once been a palace of Saddam Hussein, she saw a bathtub that Saddam had used and was seized with an inspiration.

She quickly entered the bathroom with Bumiller and locked the door. And then in homage to Miller, Dowd hunched down in the tub, settling into the same pose as Lee. Bumiller snapped a photo which Dowd proudly had framed.

Has America ever needed a media watchdog more than now? Help us by joining CJR today.
Neil Lewis was a New York Times correspondent for 24 years. After retiring in 2010, he taught at Duke Law School and was a fellow at the Kennedy School.