Paul Ryan, The New York Times seems to think, is not a brave man. “Now you have the chance to go far beyond milquetoast observations,” the Times said in an editorial on the House Speaker’s announcement that he would not run for re-election. Only a month earlier, an editorial criticized him because he “sent a spokeswoman out to issue a milquetoast defense of the special counsel.”

In the Charlotte Observer, one Democratic congressional candidate called the other “a milquetoast (and) Republican lite,” and a “privileged and elitist rich kid.”

And speaking of a hotly contested Republican race for a Supreme Court seat, a columnist for the Oconomowoc Enterprise in Wisconsin decried the “milquetoast efforts” of the people running one candidate’s campaign.

Other “milquetoast” appearances referred to a golfer, Hedda Gabler’s husband, and Snapchat. Wait. Snapchat is “milquetoast”?

Merriam-Webster defines “milquetoast” as “a timid, meek, or unassertive person,” the implication being that a “milquetoast” person is afraid to stand up, worried about backlash. By literary extension, things can be “milquetoast” as well. Yes, it’s mostly used as an insult.

It’s also related to a breakfast dish. “Milk toast,” also called “milk sop,” is just what it sounds like: toast softened with milk. The Oxford English Dictionary says it’s an American invention, tracing its first appearance to 1840. Apparently it was popular, judging by this 1855 description: “This delicacy is made of slices of toast, buttered and sprinkled with pepper and salt, and laid in a dish of warm milk, which serves as a sauce to the rest.” (Yum!)

“Milk toast” has little substance, cannot hold its shape, and is practically liquefied. Get the connection?

Though the description of someone or something as “milquetoast” seems to take on a French accent, it, too, is an American invention.

The original “milquetoast” was a comic book character created by H.T. Webster for The New York World in 1924. Caspar Milquetoast appeared in the strip The Timid Soul, where he entertained through his timidity, literal readings of signs, and refusal to engage anyone in discussions that could turn to controversy. He enjoyed some popularity, even appearing with his creator on the cover of Time magazine in 1945, and he loaned his name to others who shared some of his traits. As time went on, and people forgot who Caspar was, the phrase just became “milquetoast,” usually lowercased. 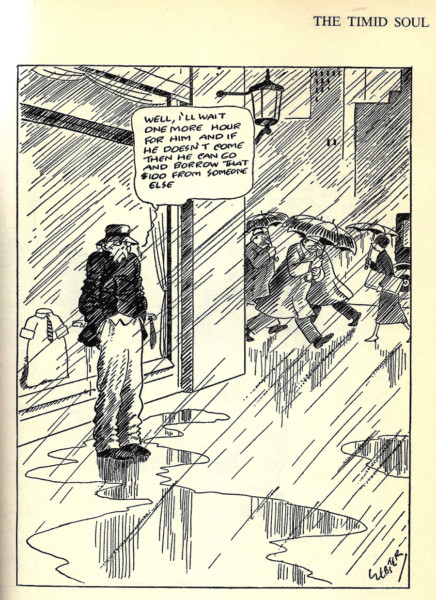 Today, we might call Caspar Milquetoast or someone of his ilk a “wuss.” Or even a “snowflake.” As we wrote about a year ago, “during the contentious 2016 election, ‘snowflake’ took on more ominous tones, usually hurled by people on the right side of the political spectrum, usually at people on the left. The implication is that a ‘snowflake’ is weak, emotional, and ineffectual, melting at the first sign of heat.” Sure sounds like “milquetoast,” which has to be eaten with a spoon because it doesn’t have enough substance for a fork to hold.

What we might be seeing is the left’s counterpart insult of someone on the right. In recent months, most “milquetoast” references in the (admittedly limited) Nexis database are to fictional characters or plots. But in references with political context, “milquetoast” is overwhelmingly used to describe Republicans or conservatives, not liberals or progressives. Most of those references are in editorials, opinion columns, or letters to the editor, because, just like “snowflake,” it carries more weight as an insult best left to direct quotes, columns, or editorials.

To use “milquetoast” in reference to Paul Ryan might be particularly apt. He is toast, and the Democrats are sure to milk his departure for all it is worth.

RELATED: Newspaper staffers push back against their paper’s publisher