According to what we used to call old wives’ tales, picking up a frog or a toad could give you “warts.”

That’s “fake news”: Those bumps on frogs and toads aren’t really “warts” at all, and real “warts” are caused by a virus. (Still, exercise caution, since some frogs and toads are poisonous to touch—or lick.) Some people still “worry” that picking one up will give them “warts.” They are just “worrywarts.”

Trending: Amid a sea of voices, Vox’s Carlos Maza breaks through

A “worrywart” is not just someone who worries; it’s someone who worries needlessly, often without justifiable reasons. In a recent interview, Carson Daly of the Today show said he was a “worrywart kid” and had frequent panic attacks. He still suffers from anxiety, he said.

We usually say that a “worrywart” is exaggerating: “a person who is inclined to worry unduly” is the Merriam-Webster definition; “one who worries excessively and needlessly” is from American Heritage; and “an inveterate worrier, one who frets unnecessarily” is from the Oxford English Dictionary.

In other words, calling someone a “worrywart” is accusing them of being overstressed. But you don’t know whether they are, since it’s their worry, not yours.

The OED says the term is two words (“worry wart”) and is colloquial, chiefly in North America. It says the first appearance was in 1956. M-W says it was 1936, and that “worrywart” is just one word.

Both could be right, because “worrywart” hasn’t always meant the same thing.

Beginning in the late 1920s, a character called the “Worry Wart,” drawn by J.R. Williams, appeared in Dell comics. This tyke was not a worrier at all: He was a nuisance, an annoyance. He caused others to worry.

The World Wide Words blog says “worrywart” took on its current meaning sometime after World War II, when it also showed up in England, possibly explaining the OED’s recognition date.

So how does “wart” grow on “worry”? The answer is unclear, but remember that a “wart” isn’t just a blemish on the skin. “Wart” has been a colloquialism for someone obnoxious or objectionable since at least the late 19th century. The phrase “warts and all,” meaning with all blemishes visible for all to see, also traces to about the same time the “Worry Wart” appeared. It’s speculation on our part, but since the comic character was worrying to others, perhaps Williams went with the alliterative name for its connotation. It was certainly better than “worryguts,” another colloquialism of the time. 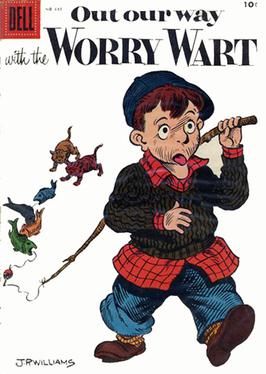 Though you’ll sometimes see the expression spelled as “worrywort,” that is generally considered incorrect. “Wort” is liquid drained from mash that is fermented to make beer or whiskey, or a plant, usually a leafy or herbaceous one. (Think St. John’s “wort.”) Some plants do have bumps or protuberances called “warts,” though, and there is a plant called the wart-wort, poor thing.

The “worrywart” is etymologically unrelated to a “stalwart,” someone strong, tough, or tenacious.

The word “wart” is relatively underused in English. We have the “warthog,” whose head is covered by bumps that resemble “warts,” but not much else. Except, of course, for Hogwarts, which makes up for the absence of “warts” elsewhere.

ICYMI: The Times tech columnist ‘unplugged’ from the internet. Except he didn’t.