Wednesday was not the first time the satirical French newspaper Charlie Hebdo was punished for making fun of Islam and Islamic extremists. In 2006, amid a famous cartoon controversy that sparked riots around the world, Charlie Hebdo reprinted the original Danish cartoons of the Prophet Mohammed and added a cover depicting him in tears and complaining about the incorrigibility of his supporters.

Muslim groups subsequently sued the newspaper for its blasphemy but Charlie Hebdo won and relentlessly forged ahead. In 2011, it published an issue “guest-edited” by Mohammed, with an image of the prophet claiming that any readers who failed to laugh would receive 100 lashes. In retaliation, the office was destroyed by a Molotov cocktail. Yesterday, a group of (reportedly three) people who appear to be Islamic extremists opened fire inside Charlie Hebdo‘s offices, killing 10, including the editorial director, Stéphane Charbonnier. Two police officers were also killed in a shootout with the gunmen outside the offices.

The incident left editors of media outlets covering the story trying to decide whether to publish cartoons from the magazine’s extensive history of provocation. The outlets that did publish an array of pertinent cartoons provided reminders of how good journalism depends on the liberal exercise of the right to free expression. The decisions of those who published no cartoons or who were highly selective in which cartoons they published showed how fear of being seen as insensitive, particularly by Muslims, can stand in the way of telling thorough, contextual stories that benefit the broader public.

This cover, published in 2011, after the attack on its offices, depicts a Charlie Hebdo staff member passionately kissing a Muslim man. The headline says, “Love is stronger than hate.”

With few exceptions, it has been digital outlets like The Huffington Post, The Daily Beast, Business Insider, BuzzFeed, Vox, and Slate that have exercised their constitutional right by republishing the cartoons that are thought to be the basis for the attacks. In contrast, many “legacy” organizations, from CNN, to The Washington Post, to The New York Times, largely withheld the images. In explaining its decision not to distribute any of the images, the AP’s spokesman, Paul Colford, was quoted as saying, “It’s been our policy for years that we refrain from moving deliberately provocative images.” Bloomberg, meanwhile, published a slideshow that included many of the incendiary covers.

Whether the decision to show the photos was a pure display of solidarity for fallen comrades, a play for page views, a reflection of persistent differences in editorial culture between “legacy” and digital-native outlets, or a combination of the above, is impossible to know. But one way or another, the outcome is praiseworthy.

As Daily Beast editor Noah Shachtman sees it, the decision not to publish, on the other hand, is deplorable. “For the media organizations that decide to cut these pictures or blur them out, I just find that to be reprehensible,” Shachtman said. “It’s hard to interpret that as anything but giving in to the monsters that just massacred a bunch of people.” The Daily Beast re-posted an updated gallery of cartoons originally published in 2011, under the headline “16 Most ‘Shocking’ Charlie Hebdo Covers.”

Washington Post media columnist Erik Wemple seemed to agree with Shachtman, in criticizing CNN for saying that it was continuing to consider whether or not to publish the cartoons hours after the event (for the moment, it appears to have decided not to). “Those conversations shouldn’t take so long,” Wemple wrote. “Show it all, whatever the consequences.”

Yet, conspicuously missing from Wemple’s column were any images of the Charlie Hebdo cartoons he was calling for CNN to broadcast. Indeed, on Wednesday, the only Charlie Hebdo cartoon on any Post story about the crisis was one featuring Abu Bakr al-Baghdadi that the French paper tweeted hours before the attack. In explaining the Post‘s decision, executive editor Marty Baron told me by email, “We have a practice of avoiding the publication of material that is pointedly, deliberately, or needlessly offensive to religious groups.”

Fred Hiatt, the paper’s editorial page editor, disagrees, saying he felt that “reprinting one of the covers was warranted to give context to the columns and help readers get a deeper understanding of the nature of the magazine and the controversy.” The Post’s print editorial page ran the cartoon of Mohammed prescribing “100 lashes” for the humorless and, while the image does not appear in the same column on the website, Erik Wemple’s blog published a PDF of the print publication. 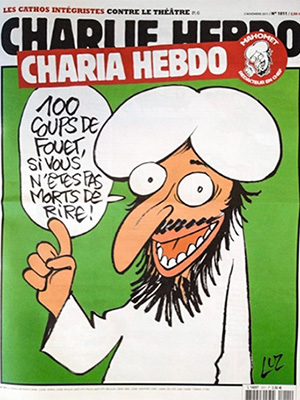 In 2011, this special issue, entitled “Charia (read: Sharia) Hebdo,” precipitated the hacking of the newspaper’s website and the combustion of a Molotov cocktail inside its offices.

Meanwhile, The New York Times said in a vague statement that it determined that “describing the cartoons” was enough, but in 2006 its editorial board justified its decision not to publish the Danish cartoons of Mohammed on the same grounds as the Post‘s Baron. At the time, they called the decision “a reasonable choice for news organizations that usually refrain from gratuitous assaults on religious symbols…” This year, the Times published only an image of Charlie Hebdo‘s latest cover, a caricature of Michel Houllebecq, whose latest novel imagines a future France overtaken by Sharia law.

Where the policies of the Post and the Times purport to grant symbols of all religions equal protection from mockery, an internal CNN memo, reported by Politico’s Dylan Byers, appeared to grant special consideration to one religious faith. The memo specifically cited the network’s refusal to show “cartoons of the Prophet considered offensive by many Muslims.”

Time magazine seems to be in the same camp. In a list inviting readers to “See 18 Controversial Covers published by Charlie Hebdo” (now with a revised title and only containing 17 covers), Time published none of the Charlie Hebdo cartoons portraying Mohammed or other Muslims which its own summary of the massacre mentioned as notably controversial. The list (which does include a cartoon of Osama bin Laden in a disco suit) contains pictures of Pope Benedict XVI coming out as gay and of a conference of “pedophile bishops” (one of whom appears to be a conniving, green-skinned Joseph Ratzinger).

The editorial reluctance of these organizations and others, including the New York Daily News (a publication not exactly known for its restraint), implies either fear of offending Muslims in particular or a flawed hierarchy of priorities. While editors are regularly forced to make difficult calls about publishing sensitive material, and while yesterday’s murders show that worries about angering jihadists are not without basis, in this case, the obvious news value of the cartoons ought to have outweighed any trepidation.

The absence of a confirmed storyline as to whether a specific cartoon ignited the attack means that a wide array of context, including the images, is potentially relevant. Furthermore, if readers want to understand the tragic affront to free speech, there is no replacement for seeing the cartoons, in their unabashed irreverence. “What kind of magazine is Charlie Hebdo? What kind of work does it publish? What are the controversies it’s been embroiled in in the past?” Slate editor-in-chief Julia Turner wrote to me in an email. “To help our readers begin to understand the answers to these questions and grasp what happened this morning in Paris, we wanted to show them the work.” 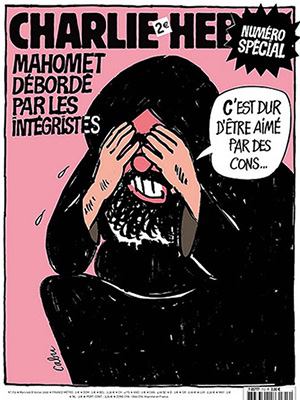 In 2006, this cover of Mohammed crying, lamenting the hardships of being beloved by fundamentalist jerks, sparked a lawsuit, which Charlie Hebdo eventually won. The headline essentially states Mohammed is overwhelmed by extremists.

Where The Daily Beast published more cartoons, earlier in the day, leaving some without captions, Slate posted fewer, but offered more detailed context. “Especially since the cartoons often include French language captions and references, we felt offering interpretations and descriptions would be the best way to help our readers understand the spirit and sensibility of the magazine, and the range of its targets,” Turner said.

That Slate, The Daily Beast and a handful of other outlets published images that formed part of the backdrop to yesterday’s murders, while so many major newsrooms were withholding so many of the cartoons, is commendable no matter the rationale. It was a stand on behalf of freedom of expression, without which there can neither be a free press, nor a press that is effective at conveying the news of the day. As Slate’s Turner put it, “In this case, standing up in some way for freedom of expression was also the path of clearer expression, which is no coincidence, and part of why these attacks are so troubling.”

That connection between “free expression” and “clear expression” encapsulates why what happened to Charlie Hebdo should devastate and motivate all journalists: When a society’s tolerance for all forms of expression is in question, a writer’s ability to clearly express herself invariably suffers.

TOP IMAGE: Telling the full story of a massacre, and striking a blow for free speech, should trump major news outlets' concern about offending Muslims