Experimentation is often more helpful in highlighting what doesn’t work than what does. Take a sponsored post from February 2015 that Deseret Digital Media produced for the Utah Transportation Coalition. “Utah: A national model and blueprint for the future,” reads a piece extolling the virtues of a plan to bolster the state’s transit system.

“Yawn, right?” says Matt Sanders, senior director at Deseret Digital Media. “It was A) a terrible headline; B) the wrong copy; and C) my goodness….We did mega-boring, useless content. And it failed.”

And that’s a good thing—a lesson for branded content efforts that the media organization has consistently expanded and sharpened. The company that owns the Deseret News, Salt Lake City NBC affiliate KSL, and FamilyShare.com has created native ad campaigns for several dozen businesses over the past three years en route to a seven-figure stream of new revenue. In 2014, it began a pilot program selling similar marketing services to other local publishers. That initiative was formally christened on Tuesday as BrandForge, a native advertising studio aimed at helping local media nationwide get a foothold in the fast-growing market for branded content.

“Local media companies have very different challenges than Manhattan media groups, which have Madison Avenue at their fingertips,” Sanders says. “We have a lot of empathy for and battle wounds in common with those [local] companies.”

A handful of innovative efforts notwithstanding, metro and local news organizations have generally fallen behind their nationally facing counterparts in this arena. Smaller outlets often lack both advertisers with advanced digital marketing strategies and the startup cash required to build branded content capabilities internally.

“Local media companies have very different challenges than Manhattan media groups, which have Madison Avenue at their fingertips.”

Global-facing media companies such as The New York Times and BuzzFeed can build out large teams to produce branded content sophisticated enough to jive with their organizations’ editorial quality and sensibility. The same is true to a lesser extent with large newspaper chains, some of which have begun trying to package their disparate audiences into cohesive blocks for native advertising online. Gannett launched its own branded content studio in March, and in April it debuted a Honda-sponsored virtual reality video that was part of a reportedly seven-figure ad campaign. Podcasts have also proven a natural vehicle for transmitting native ads to highly engaged digital audiences.

Smaller shops generally don’t have such advantages. The quandary puts local news organizations at the heart of the foundational controversy of native advertising: a tug-of-war between publishers’ and advertisers’ respective brands. Deseret Digital Media’s creation of a native advertising studio-for-hire is an attempt to bridge these divides and help local media get a piece of the action before it’s too late.

The Utah-based company itself occupies a middle ground in terms of audience scale and geographic reach, which should help it blend local sensibilities with digital know-how for clients. DeseretNews.com drew 2.4 million unique visitors in May, according to comScore, while KSL.com attracted roughly 3 million. But coupled with the social Web-focused FamilyShare venture and other digital properties, Deseret Digital Media has a relatively long digital reach. “You have to get to a certain scale before it’s worthwhile to create your own content studio,” Sanders says.

Over the past two years, the BrandForge pilot landed 30 contracts covering about 60 publishers, including the Midwestern newspaper chain Schurz Communications and the Pacific Northwest chain Pioneer News Group. The Utah-based team both trains local staffs on “the minefield between editorial and advertising,” Sanders says, and then works with them to produce specific campaigns for local advertisers.

“For the smaller organizations, there’s a lot of tension between quality and cost—what they can get advertisers to pay,” says Michele McLellan, who published a report on native advertising in May for the Tow-Knight Center for Entrepreneurial Journalism. “The problem is that some publications are still doing advertisements masquerading as stories. And I think that’s to the detriment of their credibility.”

A number of additional local and regional players have attempted to overcome those competing factors. Their efforts don’t mirror Deseret Digital Media’s exactly, but they do illustrate growing energy to pursue native advertising revenue by non-national players.

In Dallas, decidedly toward the heftier end of the spectrum, the flagship Dallas Morning News joined with a local advertising agency in 2012 to create a standalone firm, Speakeasy, for digital marketing and native advertising services. The setup allowed both founding partners to leverage what they’re good at—and avoid what they aren’t.

“The independence definitely helps us out,” says Mike Orren, president of Speakeasy. “But there’s no way we would have grown at the pace we did without The Dallas Morning News sales force.”

Speakeasy, a particularly ambitious venture that employs about two dozen, primarily produces content for advertisers’ own sites and manages their social media strategies. “We’ve done some native on the Dallas News site,” Orren says, “but on the low scale it doesn’t have the impact we’d like it to have.” (ComScore puts DallasNews.com’s May audience at 11.7 million unique visitors.)

With roughly 60 clients—Orren says annual retainer fees range anywhere from $60,000 to more than $1 million—Speakeasy is profitable and is likely to continue growing. “A couple of newspaper groups have reached out to us and asked how to do Speakeasy in their markets,” Orren says. “We’re also in some very early stages of trying to do some syndication of branded content across newspapers.”

A few far smaller organizations have likewise incorporated branded content into their businesses. In the Washington metro area, Local News Now, a group of four hyperlocal sites, counts on columns by local businesses and freelancer-produced promoted posts for between 40 percent and 50 percent of total revenue, founder Scott Brodbeck tells CJR.

Brodbeck argues that native advertising, if done correctly, makes even more sense for local brands than it does for national companies. “How effective can it be [nationally]?” he says. “It’s such a fragmented landscape out there. Here, in our areas, we have very high geographic penetration. So when we publish sponsored content, we know that a large percentage of the target readership is going to see it.”

Despite that potential, the psychological hurdles to branded content remain high among local media. In a February webinar on native advertising for Local Independent Online News Publishers, Brodbeck attempted to dispel this aversion in the second slide of his presentation. 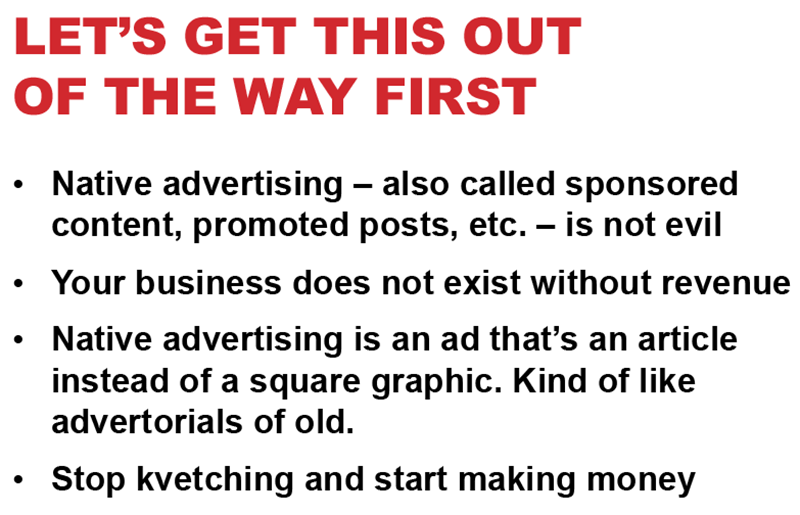 And that’s what led Deseret Digital Media’s sponsored post from the Utah Transportation Coalition to fail last year: It wasn’t particularly interesting and didn’t feel authentic. “Every user now has a really strong radar for when they’re being pitched something,” says Sanders, the company’s senior director. Now, he adds, if the company were to tackle the same project, it would produce a video on a day in the life of a Salt Lake City light rail line operator.

Deseret Digital Media’s venture, BrandForge, aims to balance costs and quality by relying on a team of about 70 freelancers to produce most of clients’ content, and another half-dozen or so to focus on strategy. Company staff will provide coordination and support, along with shouldering some video and infographic production duties. The goal is to sell services to hundreds of publishers by the end of the year.

“We’re very confident in our ability to scale,” Sanders says. “One of our key advantages is that we get to field test everything as a publisher. We have end-to-end vision of the entire value chain.”

Or, to put it another way, the ability to experiment. Small publishers can’t often afford such a luxury—it’s welcome news that Deseret Digital Media, and potentially other entrants, are doing this legwork. Revenue from native advertising won’t be enough to save local journalism alone, of course, but even modest new cash flows may be able to save individual journalists.

After January 6, when pro-Trump insurrectionists and far-right extremists invaded the Capitol, Timothy Snyder, a history professor and the author of On Tyranny, warned of rising domestic terrorism at a time of declining local news. “If we lose the institutions...