Is too much made of the mistrust of journalists?

It is the alarm of our moment, and one gets the sense that the pitch of anti-press sentiment is now the most fevered it’s been since the founding of the republic. In fact, presidents from George Washington on, including Thomas Jefferson (whose statue stands outside the Columbia Journalism School, where I work), judged newspapers to be full of lies. Editors didn’t have much regard for their own kind, sometimes challenging one another to duels. And there is a history of popular violence against the media, notably against abolitionist newspapers before the Civil War and against Black journalists and institutions at various points thereafter—a matter not of distrust but of hate and fear.

Polling allowed us to measure public confidence in the press and compare it to that in other institutions. Over the decades for which such data has been available, we have seen that people tend to think of journalism in a more favorable light than, say, the White House or Congress, but as less trustworthy than medicine, education, the military, organized religion, or major corporations. In the 1970s, faith in all these institutions began to decline. That may have been a necessary corrective to a sense of complacency that had been creeping in—among the public and the news media—that allowed perhaps too much trust: we accepted President Eisenhower’s lies about the U-2 spy plane, President Kennedy’s lies about the “missile gap,” President Johnson’s lies about the war in Vietnam, President Nixon’s lies about Watergate. It took the cultural revolution of the 1960s to bring down that overgenerous level of deference to America’s bastions of power. The result was what Daniel Kreiss, a media scholar, has called a level of “civic skepticism” appropriate to a democratic society.

As for “the media” specifically, before television network news established a settled place in America’s living rooms (in the mid-to-late 1960s) with its cautious, measured, oh-so-sober and soporific tone, there really was no such thing as “the media.” There were several large metro dailies in essentially all sizable US cities, and they were known to have political commitments one way or another on the editorial page. But “the media” as a general term for what we now call “the mainstream media” wasn’t in common use. Its full entrance into the American vocabulary was strategically promoted by the Nixon White House. To refer to journalists as “the press” ceded them an emotional upper hand, an aura of rectitude and First Amendment privilege. That advantage—unacceptable to Nixon, whose aides sensed that reporters held a bias against him—could be removed by calling journalists “the media.” William Safire, who was a speechwriter for Nixon, describes in his memoir, Before the Fall (1975), how the administration pushed the term “the media.” In the White House, he recalls, “The press became ‘the media’ because the word had a manipulative, Madison Avenue, all-encompassing connotation, and the press hated it.” Nixon judged journalists to be his opponents, Safire remembers, and declared to his staff  that “the press is the enemy” a dozen times in Safire’s presence.

It may be time for journalists to acknowledge that they write from a set of values, not simply from a disinterested effort at truth. This will not be easy.

Even if we can agree that trust in government and trust in the media were too high before Nixon, it might still be that trust today has sunk too low. Has a healthy skepticism become a civically disabling cynicism? That is what Donald Trump feeds on: engendering such distrust in the media that around 40 percent of Americans seem to accept almost everything he says, even in the face of incontrovertible reporting to the contrary, as a kind of thumb in the eye of the so-called coastal elites.

The problem here transcends the Trump presidency: the old days of ritually objective news reporting (he said/she said) are not gone but have been reduced in importance from the 1970s on, as mainstream outlets have increasingly emphasized analysis in news coverage—not quite so much “who, what, when, where” as “why.” There has been a profound cultural shift in journalism during this period. The limitations of straitjacketed objectivity came to be understood and journalism began to embrace the necessity of interpretation, as both quantitative studies and journalists’ recollections attest. Most recently, Beth Knobel’s The Watchdog Still Barks (2018) shows a continued growth in investigative and other forms of enterprise reporting from 1991 to 2011. In the face of the severe economic problems afflicting daily newspapers, leading metro dailies have continued, whenever possible, to pursue aggressive, analytical journalism. This places great responsibility on readers to discern for themselves the difference between what can be trusted as factual and what represents the reporter’s judgment—a judgment that, however conscientious, goes beyond documented facts.

News organizations should have to explain themselves—to communicate the difference between the news department and the editorial page (more than a quarter  of Americans do not understand the distinction); to show how they gather their news; to clarify why they sometimes cannot divulge their sources; to explain why it matters that nearly all scientific authorities believe that the most important element in global warming is what humans contribute to it. 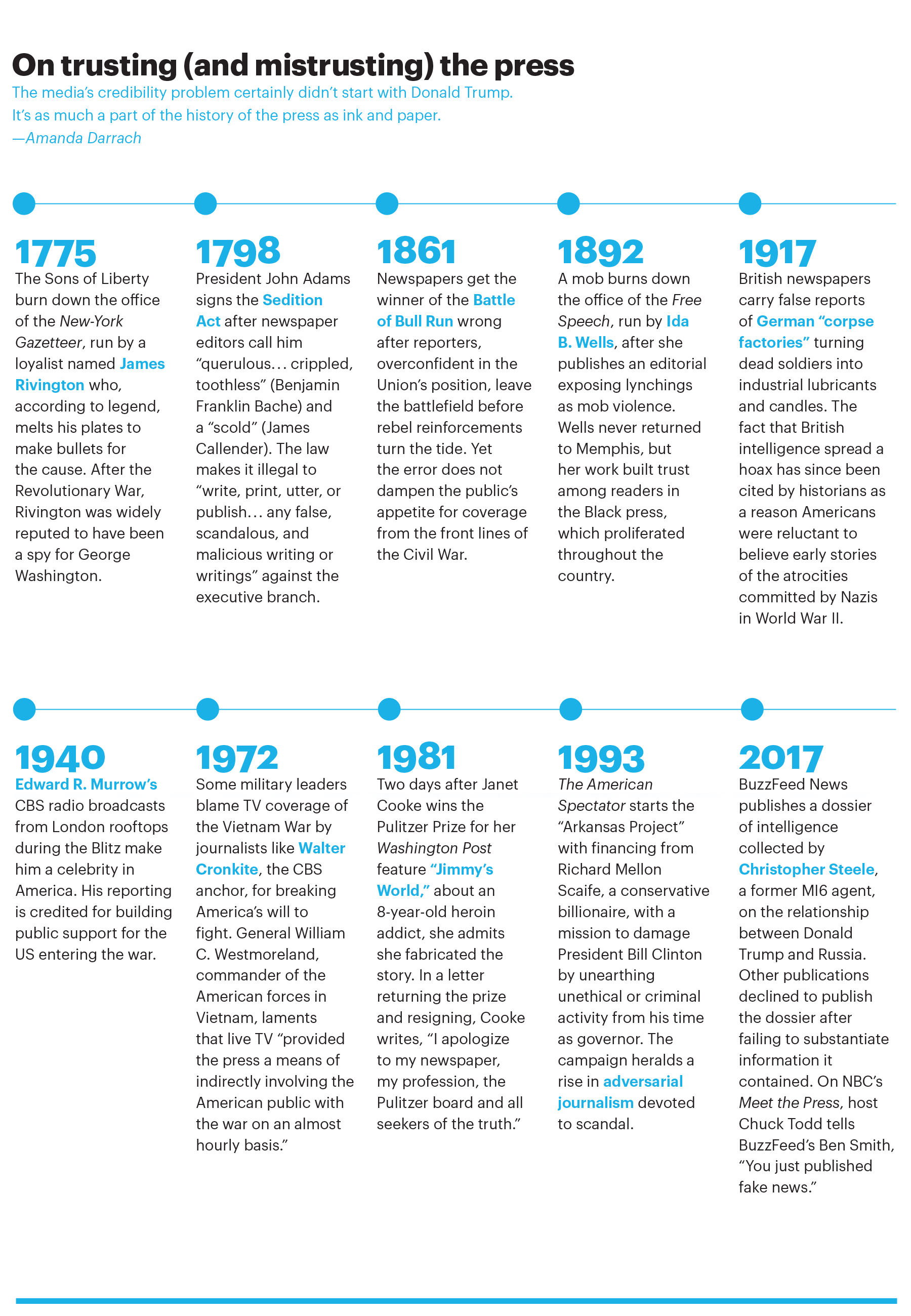 It may also be time for journalists to acknowledge that they write from a set of values, not simply from a disinterested effort at truth. This will not be easy, since journalists have spent decades denying that their personal values have anything to do with their news reporting. And yet most do adhere, quite passionately, to professional values, just as doctors take seriously the Hippocratic oath. Journalists in the mainstream media almost all feel strongly that (1) they should seek truth; (2) they should hold government publicly accountable; and (3) government officials, elected and appointed, are public servants and should not be in government to line their own pockets. My guess is that those values would resonate with readers, if only they were articulated.

Like many other journalists, Margaret Sullivan, media columnist for The Washington Post, has worried about the low level of trust Americans have in the news media. In talking to news consumers about this, she found people more mild-mannered and nuanced than the polls seemed to indicate. Tom Rosenstiel, the executive director of the American Press Institute, told her that for many people, “there’s ‘the media’ (bad) and there’s ‘my media’ (fairly good).” Likewise, he noted, people have little faith in Congress but think their own local representatives are okay.

Most people, though, are busy living their lives—that is, they’re not thinking about the media intensely, even if they feel, in Rosenstiel’s words, “a general unease or frustration.”

Sullivan suggests that journalism could regain some trust by focusing on topics that affect ordinary people’s lives and by “stamping out” a snarky attitude that implicitly brags, “I’m smarter than my audience.” In the end she sings a familiar refrain: “More transparency.”

If one advocates more transparency on the part of the press because it makes for more informative and comprehensive journalism, fine—a greater degree of “showing one’s work” could make journalism more instructive. But I don’t think it will bolster trust.

It was not media action that reduced trust. What happened recently (I think) is that many people could see that an elite few were getting very, very rich while they themselves were falling behind. Government was producing neither the inspiration nor the concrete policies to make anyone more trusting. And politics were getting more sharply polarized. Democrats are much more likely to be “consistently liberal” and Republicans “consistently conservative” on matters like taxation, government spending, regulation, and environmental protection than they were 50 years ago, when trust in the media ran higher.

Would it help if news organizations were more transparent about how they produce the news? Maybe, a tiny bit. What would really help is a reduction, by way of policy, in economic inequality and in inequality of social recognition and dignity. With that, I’d hope, would come a reduction in political polarization, with concomitantly reduced incentives for politicians to seek applause for extreme statements, including disparagement of political opponents. Perhaps it’s not surprising to learn that journalism’s self-defined mission of “holding government accountable” is hurting trust. In the past 40 years, “accountability journalism” has come to assert itself as a defining feature of mainstream newsrooms. The news is much less deferential than it once was to institutions and people in power. That may be good, but it also means that a lot of people are going to distrust the media, particularly when their favorite politicians or the parties they identify with are critically appraised or openly confronted by journalistic investigation, information, or opinion. It will not matter how many “meet the reporters” events news organizations sponsor or how much they itemize where every bit of information in a news story came from. What people don’t like about the media is its implicit or explicit criticism of their heroes. It’s just more comforting and, let’s face it, more human to blame the messenger than to take critical reports seriously.

“The media” is more responsible, more accurate, more informed by sophisticated analysis (rather than partisan reflex) than it has ever been before. But political opinion has grown more polarized. And that is reinforced by the press: as the once-reliable business model of news gathering disintegrates, polarized politics becomes, sadly, a delicious topic for highly competitive outlets to report on. It is more tempting, for instance, to cover a government shutdown in play-by-play sports style as a conflict between Donald Trump and Nancy Pelosi than to explain what a government shutdown actually involves. Our best news outlets attempt to do the latter, but the big “government shutdown” news of the day tends to cover conflicts in Washington. What a government shutdown means for federal employees, for income tax refunds, for food inspections, for the number of Transportation Security Administration workers at airports, for access to national parks—this requires reporting on far more than what Congress and the White House can agree on and how long that takes. It requires finding the story wherever around the country federal workers are furloughed, not just Washington.

Can journalism curb its passion for play-by-play news? I don’t see that happening; on the contrary, matters only get worse with the 24-hour news cycle. Can journalism break its commitment to holding politicians accountable and treating them with skepticism? I hope not—even if that might increase trust.

Some things are more important than how people respond to pollsters asking about trust. One of those things is responsible, accountability-centered journalism.

Has America ever needed a media watchdog more than now? Help us by joining CJR today.
Michael Schudson is a sociologist and historian of the news media and a professor at the Columbia Journalism School. His latest book are The Rise of the Right to Know: Politics and the Culture of Transparency, 1945-1975 and, with C. W. Anderson and Leonard Downie Jr., The News Media: What Everyone Needs to Know.