A magazine for Christian teenage girls is making a comeback after 19 years in the dark. Published by evangelical nonprofit ministry Focus on the Family, the May 2017 issue of Brio is hitting mailboxes as early as this week. Nine more issues will be released before the end of the year.

Colorado Springs-based Focus on the Family published the magazine from 1990 to 2009, alongside a sister publication called Brio and Beyond, which catered to an older audience and is not making a comeback. Together they amassed 260,000 subscribers and quite a following. However, a smaller fundraising haul led the ministry to drop the magazines.

TRENDING: 11 images that show how the Trump administration is failing at photography

But now, Brio is returning to the scene to offer young women a “biblically-based worldview,” Focus on the Family vice president Bob DeMoss tells CJR. The nonprofit has received phone calls, letters and emails on a weekly basis since dropping the magazine.

“I have a letter from a 14-year-old girl who said ‘I know my mom used to get it because she has them saved in the closet,’ and she says ‘Boy I sure would love it if you would bring back Brio, I’d subscribe in a jiffy,’” DeMoss says.

The magazine will focus on topics such as social media engagement, friendships, bullying, peer pressure, and fashion. In the past, the publication has included cover lines such as: “8 Tips for Praying for Your Friends,” “10 ways to love your siblings,” “7 ways to be positive” and “Judgment Day: Are You Ready?”

DeMoss says one of the main purposes of the magazine, which already has about 43,000 subscribers, is providing a forum to discuss the place of faith in day-to-day life. The May 2017 cover of Brio Magazine, featuring Duck Dynasty star Sadie Robertson on the cover. Image via Focus on the Family.

“One of the things that you might notice that’s surprisingly absent from virtually all teen magazines for girls is any discussion of the relevance of faith to the discussions at hand,” DeMoss told CJR. “One of the things that Brio would hope to do is to say if you’re a person of faith, your faith matters and it informs the decisions you make. You don’t have to just approach life through the ebb and flow of public opinion. You can have a bedrock of the Bible.”

DeMoss adds, “if a person is a person of faith and they want a Judeo-Christian perspective on issues relevant to that audience, they’re not going to find it in the pages of Teen Vogue or Seventeen.”

Teen Vogue has made headlines of its own for making the editorial decision to go after Donald Trump in an op-ed and highlight political issues like feminism, activism, and LGBTQ rights.

DeMoss says Brio will not wade too deeply into politics, however he told NPR the magazine will oppose LGBTQ relationships, abortion, and premarital sex. When CJR asked about those stances, a spokeswoman for the magazine wrote in an email, “I wouldn’t phrase it that way. The publication will support a Christian worldview and a biblical sexual ethic.”

The magazine will also serve another purpose. As Slate said in a recent article, “Brio isn’t just for teenagers. It’s also for the adults who want to influence them.” It’s a point Focus on the Family promotes on its own site: “As a parent, grandparent or mentor of a teen girl, you know culture bombards her with messages about her body, fashion, relationships, values and faith. But you’ve taught her biblical truths about loving God, valuing others, the importance of modesty and how she is wonderfully made. Continue your influence in her life by providing Brio magazine on a regular basis!”

We asked DeMoss about the magazine’s role as a parenting aid. 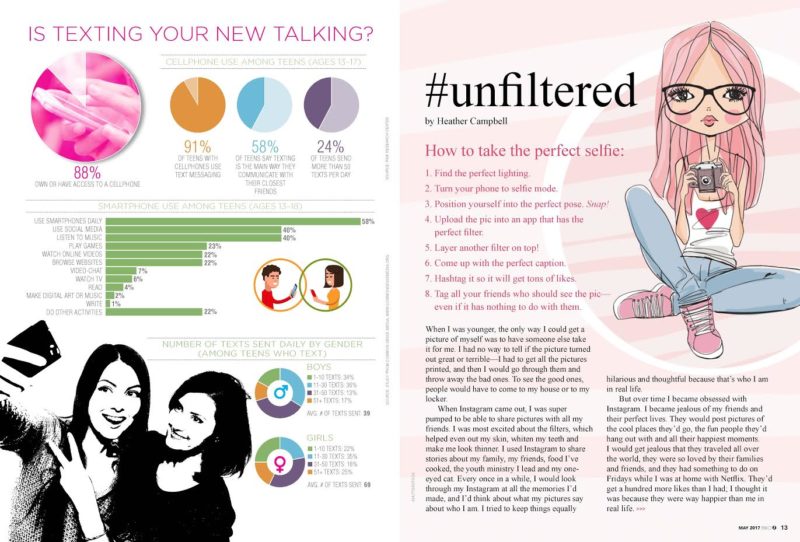 An inside spread from the May 2017, courtesy of Focus on the Family.

“I don’t know how that’s any different than a professor—whether they’re liberal, moderate, or conservative—picking textbooks to help teach their kids a worldview that’s consistent with their leanings,” DeMoss says. “I mean, there’s nothing inappropriate or wrong with that, and part of the goal of parenting is to raise up a generation of kids that can think for themselves, that can be discerning, that can use wisdom, that knows what they believe, what their core values are and if Brio is a tool that can help them get the job done then that’s a good thing.”

The new issue features Duck Dynasty star Phil Robertson’s 19-year-old granddaughter Sadie Robertson on the cover. It also has an article on whether the music of Bruno Mars is morally acceptable. The magazine warns that his music is catchy but “bad language turns up pretty frequently” and “his view of women is anything but honorable, pure, lovely or commendable.”


The magazine will not be available online, but you can buy issues of it here.

ICYMI: Donald and Melania Trump’s relationship through a lens