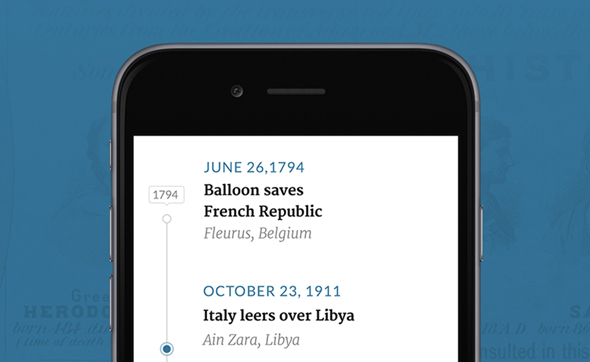 On Timeline, a new made-for-mobile app, the news is told chronologically.

An orangutan gaining legal rights in Argentina, for instance, inspired an article last week on the history of personhood, which begins in 1266 France with seven pigs on trial for murder. Similarly, the recent Umbrella Movement in Hong Kong is the last item on a timeline asking, “Will China Ever Tolerate Democracy?” And the attacks on the staff of Charlie Hebdo led to a review of Islam’s 1,400 years of depicting the Prophet Muhammad.

Billed as a site about “current affairs through historical perspectives,” Timeline is another crack at explanatory journalism in the vein of Vox, The Upshot, or FiveThirtyEight.

At the San Francisco-based startup, the inverted pyramid is mostly reversed, with the article starting in the depths of history and working its way to the newsier present. Redolent of news app Circa, each Timeline story appears as a vertically scrolling, chronologically ordered series of cards, each one pegged to a historical event. Each card is concise–usually two to three paragraphs long, or 100 words–and the format is clean, easily digestible, and made for mobile consumption.

“We’re trying to keep it very lightweight, like a snack,” said Timeline’s CEO Tamer Hassanein in an interview. Timeline does not do original reporting but repackages existing information into something shinier, more contextualized, ordered. 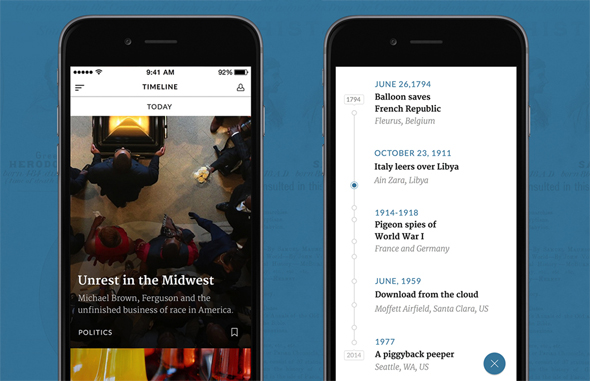 Yet unlike sites like Vox, whose content spans charts, maps, interactives, and (even) narrative stories, Timeline’s takes only one form. And with rigid structures come limitations on how well an event can be explained. Despite Timeline’s headlines, the questions the site answers are less “why” than “when.”

Hence the timeline pegged to the Argentinian orangutan’s legal rights titled, “What is a person?” is less a deep dive into the freedoms of primates and swine than a review of these issues arising in court. And the article, “Will China Ever Tolerate Democracy?” is simply a play-by-play of democracy flashpoints–Empress Dowager Cixi stifling political reform in 1898, and the Communist government reneging on a deal for open elections in Hong Kong–but it doesn’t answer the question it teases.

Every story needs context, but world phenomena can’t always (or usually) be neatly mapped onto historical flashpoints. The 1914 assassination of the Archduke Franz Ferdinand sparked World War I, for example, but it would be foolish to view that single event as the prime cause of one of the bloodiest eras in human history.

For these reasons it’s hard to see Timeline as a definitive source of explanation on knotty subjects. Instead, it could be a complementary resource to in-depth research, or a way to get up to speed on a news event–particularly if every time someone Googles an event and the term “timeline,” the site pops up near the top.

Then again, perhaps the explanatory limitations of timelines aren’t relevant. “The idea is to provide the reader with stories that they can remember,” said Hassanein. “Things that are memorable. Interesting little tidbits. Little “aha” moments. It’s the kind of stuff you can talk about to your friends, to your family, at dinner parties.” Timeline presents itself as an explainer site, but its true calling–with the brevity of its cards, its mobile-first design, and its limitation to a single story form–may merely be fuel for conversation.