Local news outlets across the country play an essential role in creating civically engaged and informed communities. Often, these outlets do their work with minimal resources. Sometimes, they do it with hardly anything, with one or two journalists taking on the specialized tasks of an entire news staff. Below, we highlight the efforts of some of these journalists, from one couple who edits the paper from their front porch in North Carolina, to another whose paper is delivered by plane to those living in remote Alaska. 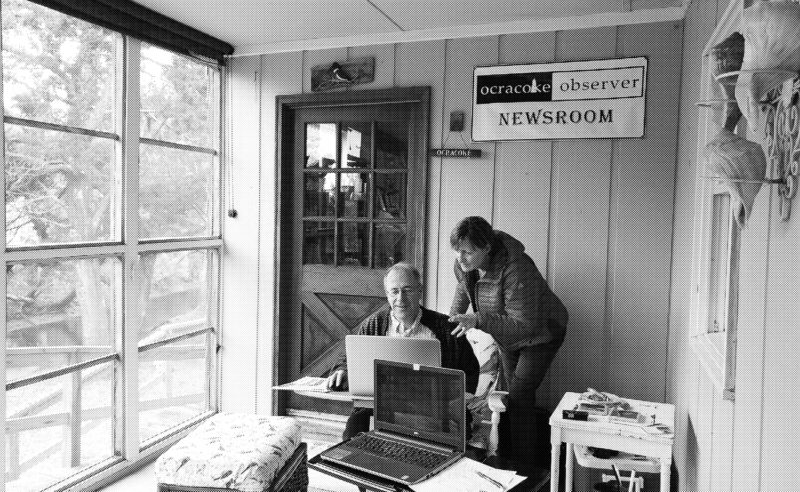 Ocracoke, on North Carolina’s Outer Banks, is reachable only by ferry, private plane, or boat. The island’s newspaper, the Ocracoke Observer, is run from Peter Vankevich’s porch, and the office uniform consists of shorts and flip-flops. Vankevich owns the monthly with Connie Leinbach, and both came to the island after careers elsewhere. Leinbach was a newspaper reporter in Reading, Pennsylvania, and Vankevich worked in the copyright office of the Library of Congress. In 2014, after the paper’s owner decided to sell, they jumped at the opportunity. Leinbach and Vankevich, both 63, put out the paper with the help of a few regular contributors.

Leinbach says the Observer had become more of a monthly newsletter by the time they took it over, but “we transformed it into a true newspaper. We found people really do want to read about all the news going on here.”

Says Vankevich: “We cover the county commissioners, the various authorities, the National Park Service, the Planning Board, the Mosquito Control Board. The locals have embraced it. No one reports more on the North Carolina Ferry Division; it’s our lifeline.” Established in 1897, The Nome Nugget is Alaska’s oldest newspaper. Diana Haecker and her husband, Nils Hahn, took over the weekly after its previous owner, Nancy McGuire, died last year. Haecker, 50, had been a reporter for the paper and McGuire “pretty much treated everyone that worked for her as family,” says Haecker. The staff is small—there’s a sports reporter, a reporter who covers education and general news, and a freelancer who has covered the city beat for more than 30 years. Hahn handles advertising and layout.

The tricky part of putting out the Nugget is delivering the paper after it’s printed in Anchorage. Nome and some nearby communities do not have a proper road system, so a plane service delivers the papers. The goal is to get them to readers by Thursday, but bad weather or mechanical problems sometimes cause delays. Haecker jokes that a lot of her job is chasing down where the papers are and dealing with phone calls when they’re late. The Budget is the world’s largest Amish and Mennonite newspaper. Founded in 1890, it started out as a traditional community paper. Over time, many local Amish families moved elsewhere and would send The Budget newsy letters, which the paper published. As the number of settlements grew, so did the volume of letters. “To this day, 127 years later, that’s our model,” says Milo Miller, the newspaper’s associate publisher.

Each Wednesday, The Budget puts out a 16-page edition devoted to Sugarcreek news, and a 52-page national edition made up of about 650 dispatches from Amish and Mennonite settlements as far away as Israel, South Africa, and Ukraine. Most letters, sent in by 950 scribes, as they are known, are handwritten. Half arrive by mail, 40 percent via fax, and 10 percent are emailed. More than 550 letters a week are typed by the editorial staff, none of whom are Amish, though two are Mennonite.

Miller’s father was raised Amish, and his grandmother was a scribe. “We’re their voice,” he says of his readers. “We’re their way of being able to communicate, and keep in touch with what’s going on.” Gerri Peterson, 31, started writing for the Hooker County Tribune in the eighth grade, and continued throughout college. When the owners asked her about her plans after graduation, she responded, half joking, “Well my dream job is to own a small-town newspaper, so let me know when you guys are ready to sell.” That’s how, at age 22, Peterson became the owner of her hometown newspaper.

Peterson devotes Mondays and early Tuesday mornings to putting together the black-and-white weekly tab. By 9 am, she emails it to a printer in North Platte, 70 miles away. A few hours later, she drives to pick up the papers so she can mail them the following day.

The Tribune focuses exclusively on rural Hooker County and its 736 residents. Recent stories included a guide to Easter egg hunts and track meet recaps. Peterson is taking a three-month maternity leave. She hired a recent college graduate from out of town to temporarily fill her shoes. Caroline Titus, 55, identifies with editors who have been attacked by President Trump. “I’ve been told to sit down and shut up, and even been told to avert my eyes when I looked [public officials] in the eye, so it’s really interesting to watch it play out on the national scene,” she says. Last year, Titus won three press freedom awards for her work at The Ferndale Enterprise, a six-page weekly. The awards recognized her for covering the Humboldt County Fair Association, despite its attempts to stop her.

Titus, a former TV and radio reporter, bought the paper in 1998. Aside from a columnist and a former intern covering sports, she runs it alone, out of her Victorian home.

Titus’s husband was CEO of the county fair for decades. Over time, she published stories that reflected negatively on fair board members, including one on the 2009 arrest of a member for drunk driving. Afterward, members of the board allegedly told Titus’s husband, Stuart, that he might lose his job if he didn’t do something about the Enterprise’s coverage. Titus reported as much in the weekly, and the fair board didn’t renew her husband’s contract. The couple filed a wrongful termination and civil rights lawsuit against the fair association and settled for $150,000 last year. Titus also successfully filed suits to force the board to make financial documents public.

The fair association declined to comment. Its press release at the time said the settlement was not an admission of guilt.

The Tituses are now renting rooms on Airbnb, inviting guests to stay at a real newspaper office. Since the November election, Titus says, not only has she gained subscribers, “I’m getting postcards with people saying, ‘Thank you for everything you’ve done to protect the press’s rights in our little town.’”

Correction: An earlier version of this story misstated the date of the DUI arrest of the Humboldt County Fair board member.