Disinformation is not new. Wherever there has been power, there has been a struggle for narrative control. The stakes are high: when successful, political actors can construct an information system that serves their ends—inventing facts or rejecting them, to produce an experience of the world.

The images that follow capture efforts to gain and regain control over narrative. Produced at different moments in time, in different parts of the world, they show that the tactics of manipulators past and present are remarkably consistent. Information is moved physically across geographic and other barriers. It is inscribed in visual metaphors and produced in popular media. “Unofficial” information is denounced by the state. Political propaganda is reframed by a clever photographer, revealing the underlying hypocrisy. And finally, manufactured narratives are absorbed into personal beliefs, resurfacing in the voices of individuals. During the Cold War, Radio Free Europe launched nearly six hundred thousand meteorological balloons in flight from West Germany across the Iron Curtain. The balloons were loaded with leaflets containing anti-communist news, propaganda, and messages of friendship from the United States to Eastern Europe. A US propaganda leaflet dropped over Takhar Province in Afghanistan, territory held by the United Islamic Front for the Salvation of Afghanistan (also known as the Northern Alliance). The leaflet depicts an American soldier shaking hands with a local man. The text reads, in Dari and Pashto, “The partnership of nations is here to help.” The US military has continued to use airborne propaganda. This engraving caricatures a controversy over smallpox inoculation in Britain, including the fear that recipients of the vaccine would develop bovine features. 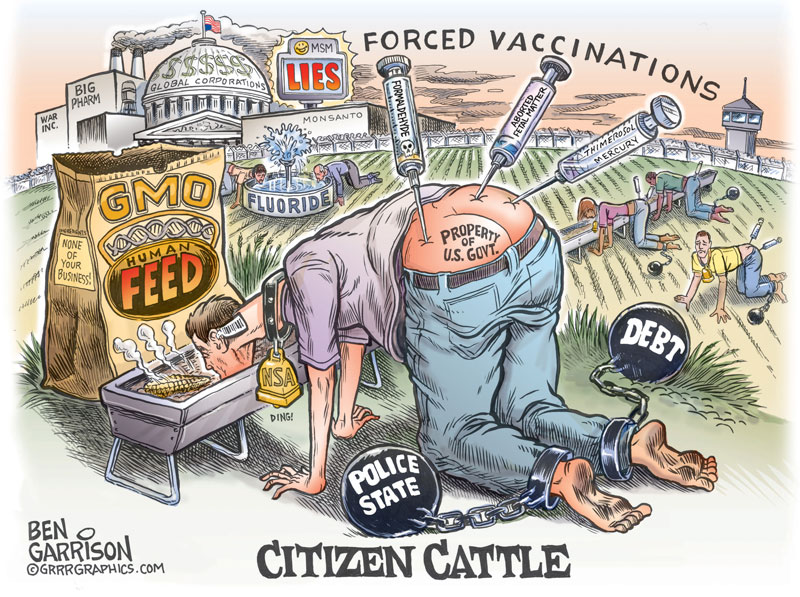 2015
This right-wing cartoon depicts “forced inoculation,” referring to mandatory vaccination requirements in schools, as a measure of government control. 1967
During the civil war in Nigeria, disinformation figured prominently. These state-issued posters aimed to dissuade people from spreading rumors. 2013
As new platforms like WhatsApp began to allow for faster transmission of rumors through familial and ethnic groups, the Nigerian government put up billboards telling citizens in Yenagoa to quit gossiping about politics. 1937
African Americans in Louisville lined up to receive food and clothing from a relief agency after the Ohio River flooded their city. This image, by Margaret Bourke-White, is a pointed rejection of the messaging on a billboard produced by the National Association of Manufacturers that hovers above the figures. 2016
A scene outside the Republican National Convention in Cleveland revealed a stark contrast between the messaging of the Trump campaign and the reality surrounding it.

Taking matters into their own hands 2015
After Hillary Clinton appeared at a community college in Concord, New Hampshire, a protester invoked conspiracy theories commonly used to discredit her candidacy for president.