For the Marshall Islands, a collection of narrow coral atolls in the middle of the Pacific, climate change is an immediate and existential threat. The Marshall Islands could be submerged within a century; well before that, they will be uninhabitable. Already, regular flooding has damaged infrastructure. Food and water are scarce. Storms lash with increasing frequency.

This is the part of the story where climate journalism would typically stop. But in the Republic of the Marshall Islands, where there’s no higher ground to speak of, the climate story is not typical. Every story is a climate story.

The following pages showcase journalism that has risen to the challenge. Drawing from a three-part series in Mashable by Kim Wall and two visual collaborators, Susanne Rust’s reporting for the Los Angeles Times, and a piece by Amanda Sakuma for MSNBC, the climate story that emerges here is complex, ongoing, and unexpected. These journalists traced the climate narrative through a legacy of American militarism, the mass migration of Marshallese to an unlikely new home, and the geopolitical tensions that underscore the islands’ precarious future. This work offers a road map for the climate journalism that we urgently need everywhere.

The Republic of the Marshall Islands consists of five islands and twenty-nine coral atolls, situated between Hawai‘i and Australia. Though independent since 1986, the nation is financially dependent on aid from the United States, exchanged for the use of Kwajalein Atoll as a US military base.

A Marshallese child plays near a makeshift seawall. The Marshall Islands sit, on average, 6.5 feet above sea level. Studies show that since 1993, sea levels in the western Pacific have been rising at a rate of 0.3 inches per year, which is twice as fast as they’re rising elsewhere in the world. In 1944, the US forcibly displaced Marshallese communities in order to build a military base and test nuclear weapons. Over the next fourteen years, the US dropped sixty-seven atomic bombs on the Marshall Islands. Marshallese life was irrevocably changed: radiation poisoning wreaked havoc on islanders and their food systems; cultural practices broke down with the loss of ancestral land. Susanne Rust wrote about how the US has declined to take full responsibility for its actions, by underpaying on promised reparations and downplaying health risks to people returning to radioactive areas.

Kim Wall reported on a family’s resettlement on Enewetak, an atoll that was evacuated and then bombed forty-three times. Before the family’s return, the US military scraped the island bare and then dumped radioactive soil and other nuclear waste into a crater, sealing it with a concrete dome. The structure, known as Runit Dome, has been hit by rising tides; it’s now cracked and could collapse entirely. The islands are plutonium-poisoned. Residents must rely on supply ships for food. An atomic-bomb crater next to Runit Dome, a concrete structure built on Enewetak Atoll to contain American nuclear waste. 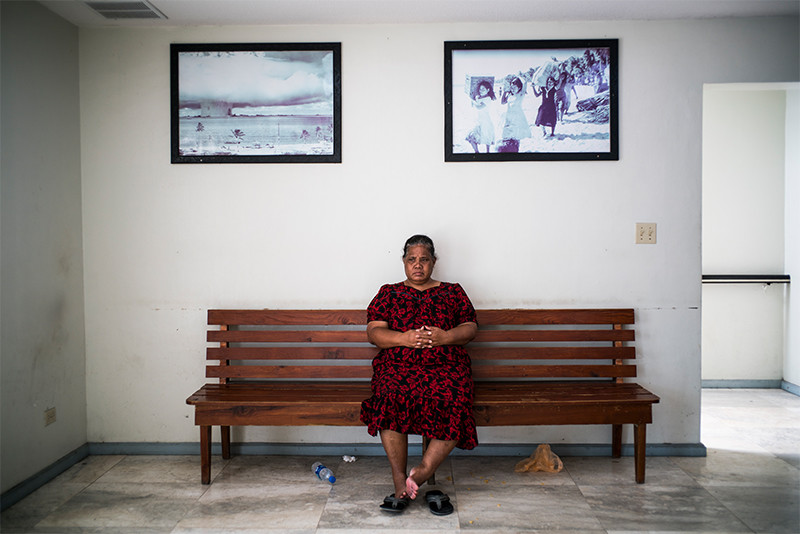 A woman sits in the Bikini Atoll town hall under images of nuclear-bomb testing and forced relocation.

As the scars of nuclear testing and climate change have made the Marshall Islands increasingly uninhabitable, almost a third of the Marshallese population has found the same solution: a one-way ticket to the United States. A Compact of Free Association, signed in 1986 to provide reparations, allows islanders to live and work indefinitely in the US without visas (and also without access to Social Security, Medicaid, or citizenship).

Wall’s reporting for Mashable introduced readers to some of the ten to fifteen thousand Marshallese who have settled in Springdale, Arkansas. She described their struggles to adapt to poultry-processing jobs and traffic laws, and their impossible dreams of returning home. These are the realities of a new class of displaced people, wrote Amanda Sakuma of MSNBC, highlighting climate refugees as part of the global migrant crisis. Coolers packed with fish and fruit for loved ones in the US have become symbolic of Marshallese migration. Ferdinand Muller, a Marshallese migrant, holds a friend’s baby at a lakeside barbecue. Brinson “Bear” Andrew, who moved to the US as a child, works at an Arkansas Walmart.

In December 2019, flooding inundated Majuro, the capital of the Marshall Islands, while an unprecedented outbreak of dengue fever filled the nation’s hospitals. At the same time, Susanne Rust reported, the nation faced a critical juncture: votes were being counted to elect members of the Nitijela, the Marshallese parliament, who could end an alliance with the US and start a relationship with China.

For the US and China, the Marshall Islands provide a setting for military access and regional domination. But for the Marshallese, the election was about the climate. The incumbent president supported maintaining ties with the US; her opposition advocated forming a link with China, which has recently been making investments across the western Pacific. For a nation in dire need of seawalls, desalination, and landscape reconstruction, the most appealing global partners are those offering aid and infrastructure investment.

The pro-China camp won. It remains to be seen what will happen, but if the US wants to hold on to its strategic position in the Marshall Islands, it will have to do better for local people—starting with making good on a promise to extend the Compact of Free Association, which is up for renegotiation in 2023. As sea levels continue to rise, there is a sense of urgency for both the nation’s coastline and its political future. Job Atlaia, who lives in the Marshall Islands, builds a seawall as part of a government project on Majuro.