In 1979, the American Society of News Editors pledged that, by the year 2000, the percentage of racial and ethnic minorities in newsrooms would match that of the population at large. Noting that this was “the right thing to do” and in the “industry’s economic self-interest,” ASNE stressed the particular importance of lifting people of color into management.

Newspapers have failed spectacularly at achieving that goal. According to the Census Bureau, racial and ethnic minorities comprise almost 40 percent of the US population, yet they make up less than 17 percent of newsroom staff at print and online publications, and only 13 percent of newspaper leadership.

Despite being in majority-minority cities, the newsrooms of The New York Times and The Wall Street Journal, for instance, are both 81 percent white. The Washington Post is 70 percent white. Minorities make up 72 percent of the population of Los Angeles, but only 33 percent of the Los Angeles Times. According to the Radio Television Digital News Association, the numbers in other media look slightly better, if still not impressive: in 2018, about a quarter of staffers in TV newsrooms are people of color; in radio, it’s 11.7 percent. The American Society of Magazine Editors doesn’t track racial and ethnic diversity, though its industry’s mastheads remain stacked with old white men. 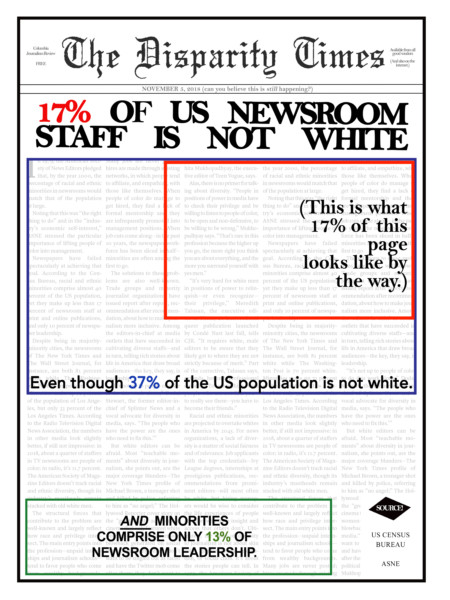 The structural forces that contribute to the problem are well known and largely reflect how race and privilege intersect. The main entry points into the profession—unpaid internships and journalism schools—tend to favor people who come from wealthy backgrounds. Many jobs are never posted; hires are made through existing networks, in which people tend to affiliate, and empathize, with those like themselves. When people of color do manage to get hired, they find a lack of formal mentorship and they are infrequently promoted into management positions. When job cuts come along—in the past 10 years, the newspaper workforce has been sliced in half—minorities are often among the first to go.

The solutions to these problems are also well known. Trade groups and minority journalist organizations have issued report after report, recommendation after recommendation, about how to make journalism more inclusive. Among the editors in chief at media outlets that have succeeded in cultivating diverse staffs—and in turn, telling rich stories about life in America that draw broad audiences—the key, they say, is leadership.

“It’s not up to people of color to do this work alone,” Dodai Stewart, a deputy Metro editor at The New York Times and a vocal advocate for diversity in media, says. “The people who have the power are the ones who need to fix this.’”

But white editors can be afraid. Most “teachable moments” about diversity in journalism, she points out, are the major coverage blunders—The New York Times profile of Michael Brown, a teenager shot and killed by police, referring to him as “no angel”; The Hollywood Reporter cover story on the “great eight” actresses in cinema that only featured white women—and the enormous blowback generated on social media. “Basically, editors don’t want to be singled out as racist and have the Twitter mob come after them; they don’t want to be politically incorrect,” Samhita Mukhopadhyay, the executive editor of Teen Vogue, says. 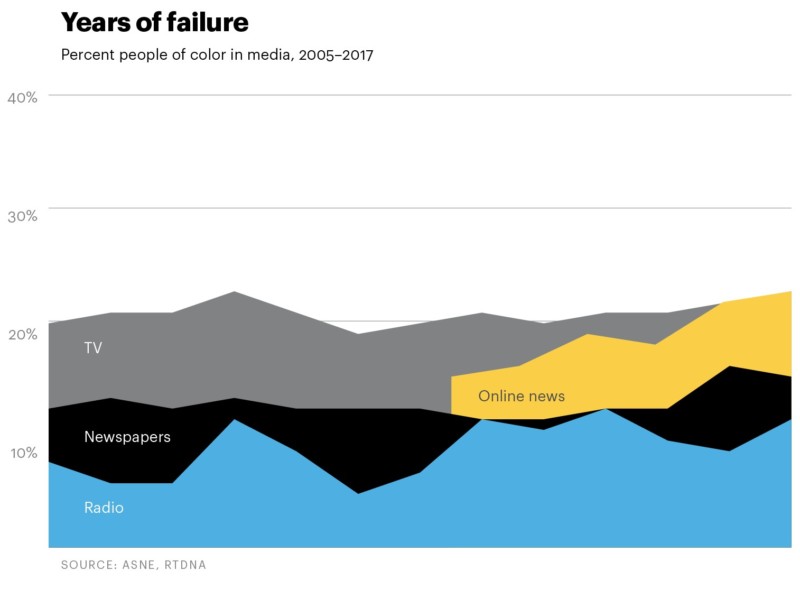 Alas, there is no primer for talking about diversity. “People in positions of power in media have to check their privilege and be willing to listen to people of color, to be open and non-defensive, to be willing to be wrong,” Mukhopadhyay says. “That’s rare in this profession because the higher up you go, the more right you think you are about everything, and the more you surround yourself with yes men.”

“It’s very hard for white men in positions of power to relinquish—or even recognize—their privilege,” Meredith Talusan, the executive editor at Them, an intersectional queer publication launched by Condé Nast last fall, tells CJR. “It requires white, male editors to be aware that they likely got to where they are not strictly because of merit.” Part of the corrective, Talusan says, extends beyond professional circles. “To empathize with people who are not like you—to really see them—you have to become their friends.”

Racial and ethnic minorities are projected to overtake whites in America by 2045. For news organizations, a lack of diversity is a matter of social fairness and of relevance. Job applicants with the top credentials—Ivy League degrees, internships at prestigious publications, recommendations from prominent editors—will most often be white, but hiring managers would be wise to consider the life experiences of people of color, who have insight and access that others don’t. Ultimately, the value of diversity to journalism is not about skin color, gender, sexual orientation, or social class. It’s about the stories people can tell.

In 2017, as part of a WSJ2020 initiative to modernize its newsroom, nearly all of the Journal’s leaders had to reapply for their positions. The goal, according to Karen Pensiero, the managing editor, was to create transparency. “Where newsrooms can get into trouble is if it’s not an open and even playing field.” She says the shakeup, which created new positions and altered existing ones, “changed conversations.” Still, the Journal’s overall percentage of minority employees has budged a mere 2 percent between 2001 and 2017, and only 4 percent among leaders.

“We need to be willing and open to admitting when we’ve made missteps and make changes to adapt and learn from those mistakes,” Melissa Bell, the publisher of Vox, says. Vox meticulously tracks diversity on staff—as well as the reasons people leave—and has implemented quarterly surveys to gauge whether people of color on staff feel included in the organization. The company also offers formal training to managers on inclusion and diversity. These efforts appear to have paid off: since Vox was founded, in 2015, the percentage of minorities at the publication has approximately doubled. 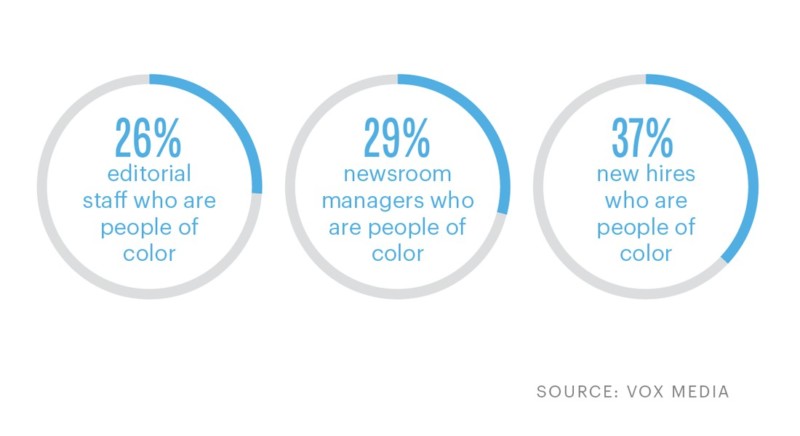 “Folks don’t really know how to talk honestly about diversity,” Lydia Polgreen, the editor-in-chief of HuffPost, says. “Editors don’t even necessarily feel they have the language to talk about what their goals are, the terms to use.” HuffPost did not make available information about its newsroom demographics. According to CJR’s analysis of its published masthead, diversity in its newsroom lags behind its digital-only peers. Polgreen stressed that it’s up to hiring managers to solve the problem. “If you’re a senior leader who really wants to make journalism better and more inclusive, you need to educate yourself.” Since 2013, when Jeff Bezos, the founder of Amazon, bought the Post, the paper has undergone a hiring spree. Tracy Grant, the managing editor for hiring and development, ethics, and standards, says that it’s easier to diversify an organization when it’s expanding rather than contracting. “I have enormous compassion for colleagues in this space who are not adding jobs,” Grant says. “The reality of it is that it’s really hard work, and it’s impossible to do when your newsroom is shrinking or not growing. Diversity is essential to newsrooms and yet in that environment, it can feel like a luxury that people can’t afford.” In 2017, Carolyn Ryan was promoted to assistant managing editor and tasked with overseeing a surge of hiring that brought in around 200 people. “You have to be flexible in looking at their skillset and what they can bring to you rather than this anachronistic notion of who’s going to fit in your culture,” she says. Diversity at the Times has inched forward a mere 3 percent over the past 16 years. Diversity among leadership, however, jumped from 10 percent who were people of color in 2001 to 19 percent in 2017. In conversations about journalism’s struggles to diversify, one often hears of a “pipeline problem.” But Ben Smith, the editor-in-chief of BuzzFeed, thinks that newsroom leaders are simply not availing themselves of the extensive talent that’s out there. “If you’re not hiring a diverse pool, you almost have to go out of your way because there’s a very diverse pool of talented reporters and talented mid-career reporters,” Smith says. BuzzFeed is the rare media outlet where diversity on staff matches that of the US population. “One of the things that has happened at NPR over the last few years that any organization can implement is simple attention to the hiring pool,” Keith Woods, the vice president for newsroom training and diversity, says. More and more, he’ll find hiring managers “pushing back on the idea that it’s okay to go forward when there are no women or people of color.” Still, the number of minorities at NPR has remained flat. In an interview with NPR’s public editor, Christopher Turpin, the editorial director, noted that NPR has “done a very bad job” recruiting Latinxs, who make up only 6 percent of newsroom employees. In 2015, when executives aimed to dampen MSNBC’s reputation for liberalism, several shows hosted by people of color were cancelled. Some outside critics mourned their loss. “Diversity always presents challenges and opportunities,” Yvette Miley, the senior vice president of NBC News and MSNBC, says. “The problem sometimes becomes when we think diversity is a fixed point on a map—it is not. Diversity is demographics that are constantly changing and you always have to evolve your newsroom in front of the camera and behind the scenes.” Kevin Lord, the executive vice president for human resources at Fox News, says that the company’s recruitment process “ensures hiring managers have a diverse slate” of candidates and uses what’s called “competency-based interviewing” in an effort to weed out unconscious bias. During daytime programming, Harris Faulkner is the only African-American woman employed as an anchor for two hours of news on any of the major networks, Lord points out. But no person of color hosts a show during weekday primetime—the period when ratings are highest and networks put forth name-brand talent. 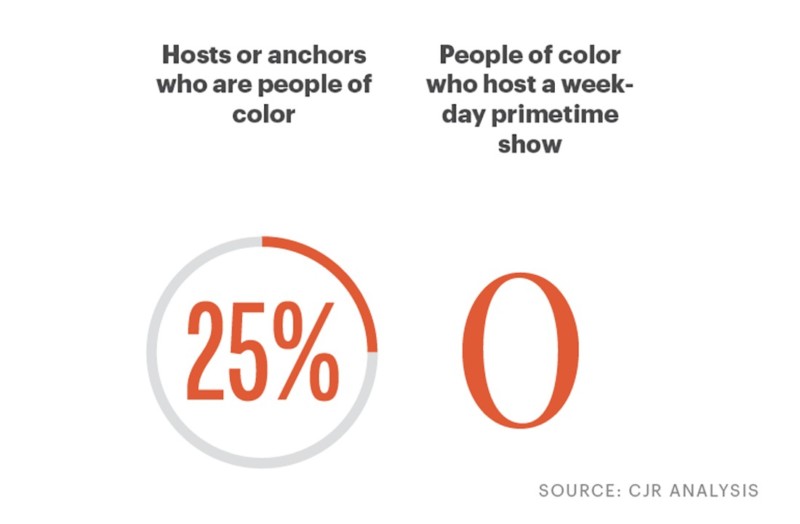 “There’s no confusion that diversity equals great business,” Ramon Escobar, CNN’s vice president of diversity and inclusion, talent recruitment, and development, says. As with its two other major competitors, however, minority representation among on-air talent stands at about half its rate in the general population. The network’s lack of diversity has been a flashpoint. In August, Soledad O’Brien, a former CNN host, replied on Twitter to a story about lack of diversity in the White House: “walk me through the senior black staff at @CNNPolitics or @cnn.” There are no people of color among the network’s senior leaders. “We have put a lot of people in place now that we’re developing as the next generation of anchors,” Escobar says. “The difficulty with The New Yorker pre-internet was that you really needed people who could immediately write 5,000 to 10,000-word pieces,” David Remnick, the editor, says. “That takes a long time to cultivate.” According to the magazine’s tally, over the past five years, nearly half of the annual contracts it has offered—many of which are primarily for writing published online—have been to people of color. “The web has probably allowed us to hire, or at least publish, new people a little bit more quickly,” Remnick says. “It has a lot of short-form possibilities where people can grow, develop.” 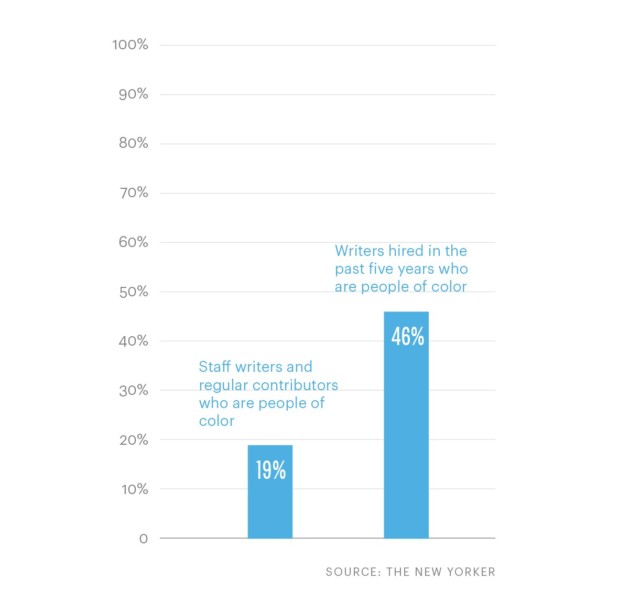 In 2014, soon after being named editor-in-chief of Slate, Julia Turner sat down with a group of staffers to talk about diversity. Among people of color, all said they had found their jobs through posted listings; the white staffers had all been told about openings by a friend. “It was eye-opening,” she recalls. Turner, who in October announced she would be departing for a new position at the Los Angeles Times, presided over a sharp jump in the percentage of minorities during her three years at the helm. Correction: This piece previously misidentified the venue in which Christopher Turpin made his comments.

Has America ever needed a media watchdog more than now? Help us by joining CJR today.
Gabriel Arana a contributing editor at The American Prospect. His work has appeared in The New York Times, HuffPost, Salon, The Nation, The New Republic, The Atlantic, Slate, and The Daily Beast. He lives in New York City.