In a radio piece from September 2, 2019, WBUR (Boston) spoke with Sharon Lerner, of The Intercept, about her reporting on how recycling works. The idea that plastic is refashioned into new products is largely untrue, she said. Instead, “it has actually ended up in landfills or scattered around the world or burned.” For years, most of America’s plastic waste was shipped to China—until 2017, when the Communist Party stopped taking it. Now, Lerner explained, “It’s piling up at recycling facilities and going to poor countries.” What we didn’t know has been hurting us. Saltwater, a neighborhood in Key Largo, on the Florida Bay, is accustomed to annual floods. But they usually ebb after a few days. On October 19, 2019, the Miami Herald reported on floods that lasted more than a month, leaving residents trapped and property damaged by seawater. The article ended on a foreboding note: “South Florida is in for about two feet of sea rise by 2060, which will make everyday high tides—and these annual king tides—much higher.” “The Trump administration is accused of muzzling climate science,” The Guardian stated, introducing six people who were sidelined in their attempts to confront the crisis. In separate interviews published on September 17, 2019, whistleblowers described what work they did—or tried to do—for the United States government, and how President Trump annihilated whatever hope they had of protecting the climate. In an ambitious digital feature, the Los Angeles Times confronted the terrible outlook for California’s coastline and explored what can be done to prevent catastrophe. “The coastline is eroding with every tide and storm, but everything built before we knew better—Pacific Coast Highway, multimillion-dollar homes in Malibu, the rail line to San Diego—is fixed in place with nowhere to go,” Rosanna Xia, the author of the piece, explained. The story, published July 7, 2019, assessed various adaptation plans and impressed upon readers the urgency of the problem.

Trash (and More) on Mount Everest CNN called Mount Everest “a very tall garbage dump.” In an article from May 2, 2019, about a recent cleanup campaign, Rob Picheta described mounds of waste left behind by hikers and noted, too, that as climate change has caused snow at the peak to melt, it has been “exposing an increasing number of dead bodies.” The effects of the climate crisis are numerous, varied, and sometimes gruesome. 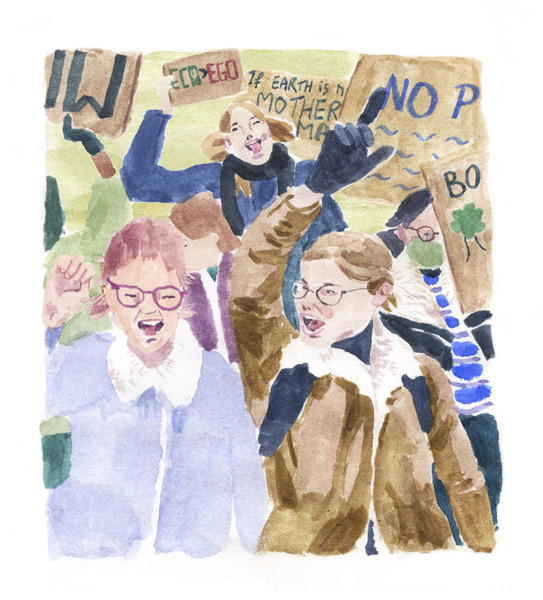 The world has its eyes on Greta Thunberg, the teenage climate advocate. Not everyone looks upon her kindly. A story in BuzzFeed from September 25, 2019, highlighted the online vitriol against Thunberg and her peers, many of them girls. “The rise of a new climate movement means there’s now a much more visible—and especially vulnerable—target: kids,” Zahra Hirji, the story’s author, wrote, casting attention on good deeds going punished.

Methane Under the Sea A monster lurks beneath the ocean, Chris D’Angelo, of HuffPost, wrote: methane ice, also called fire ice. In an article from September 2, 2019, D’Angelo reported that methane, one of the most powerful greenhouse gases, is trapped in hydrate form, which “represents one of the largest carbon reservoirs on Earth.” If the methane stays frozen, everything is fine. If climate change causes it to thaw, the result could be cataclysmic. NPR’s Rebecca Hersher and Ryan Kellman reported from Ellicott City, Maryland, producing a multi-platform piece on what happened in the wake of a flash flood. “Residents thought it was a freak occurrence,” they wrote. “Instead, it was a hint about the future.” Using radio, text, and images, their story, published November 7, 2019, made a compelling case, connecting a local weather disaster to a global crisis.