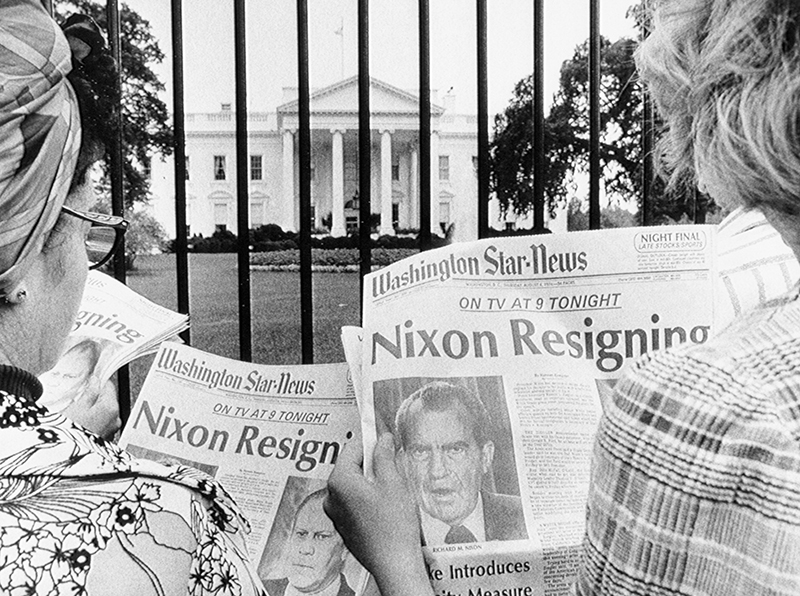 Earlier this month, Barry Sussman, a former editor at the Washington Post, died at the age of eighty-seven. Sussman played a crucial role in his paper’s coverage of Watergate—mastering the arcana of the story and overseeing the reporting of Bob Woodward and Carl Bernstein—but you may not have heard of him: he appears in All the President’s Men, the Woodward and Bernstein book (which Sussman thought, initially, he would coauthor), but was left out of All the President’s Men, the Redford and Hoffman movie, after being deemed an extraneous character, an omission that, according to the scholar Alicia Shepard, caused Sussman “permanent psychic damage.” While his death “earned some notice, it wasn’t commensurate with the impact of his work,” Nieman Lab’s Joshua Benton wrote last week. “In the half-century since the Watergate break-in, the Watergate Three has become, in the popular imagination, the Watergate Two.”

Sussman died forty-nine years and three hundred and forty-nine days after the Watergate story began—fifty years ago this morning, five burglars were caught trying to bug the offices of the Democratic National Committee. The rest, as they say, is history—or, as Benton says, “myth.” Benton wrote that the anniversary would be “endlessly mined for content,” a prediction that could, in the end, have applied to the Post’s coverage in isolation, with the paper flooding a special landing page with two dozen or so new pieces—“The Target of the First Watergate Burglary Still Wonders: ‘Why Me?’”; “How All the President’s Men went from buddy flick to masterpiece”—alongside reams of archival coverage. (The last link on the page is Sussman’s obituary, just underneath Nixon’s.) Other major news organizations ran stories on everything from Watergate’s pop-culture legacy to its “hidden Latino history” (several of the burglars were Cuban exiles), while local outlets covered the local angle; ABC11, in North Carolina, interviewed a Raleigh attorney who handed Nixon a subpoena for his White House tapes in the course of the investigation that led to Nixon’s eventual resignation in the face of certain impeachment. John Dean has been everywhere. We’ve been encouraged to view the ongoing January 6 committee hearings in the light of the Watergate hearings. We’ve been encouraged not to.

Amid all this, some commentators have also reflected on Watergate’s legacy for the media, which has typically been viewed as a watershed for dogged investigative reporting. Asked about lessons for the press on CNN, Woodward and Bernstein themselves served up bromides about perseverance and the importance of deciding “what is news,” with Woodward also citing the importance of having a supportive owner, in his case Katharine Graham, before quoting from a letter that Graham wrote, after Nixon resigned, warning the two reporters against “the demon pomposity.” Donald E. Graham, Katharine’s son and a former Post publisher himself, wrote that the paper’s reporting hit hard because it was true, adding that Nixon would likely have dismissed it as “fake news” had that term been in vogue in the seventies. Various media watchers, meanwhile, have noted that the media ecosystem of the time—with newspapers thriving nationwide and three major TV networks commanding broad public trust—was very different from today’s fractured, partisanship-addled landscape, often lamenting that Nixon and his associates would not likely have been held accountable in an age of Fox News and social media division.

There’s a good deal of truth in the latter assessment—today’s media landscape is very different from that of fifty years ago—and some such takes have made room for the nuances of historical contingency, reflecting the fact that, if a few relatively minor factors had broken differently, Nixon may have escaped accountability in his own age, never mind ours. Still, at their crudest, these takes bear a halcyon sheen. If the established media gatekeepers of the early seventies had an easier time marshaling public attention than they do in today’s oversaturated climate, the public was also more reliant on those gatekeepers not dropping the ball—and when it came to Watergate, they sometimes did, even if we now remember the hard-bitten newsman as the scandal’s dominant archetype. And Watergate could, perhaps, more usefully be seen as a way station en route to our present information hellscape, rather than an aspic-cast point of contrast.

Journalists—not least Woodward and Bernstein—did play a crucial, if far from exclusive, role in holding Nixon and his cronies to account. But that took time—and for much of 1972, the anniversary we’re currently supposed to be marking, the Watergate scandal struggled to cut through the news cycle, even as it became increasingly clear that something deeply troubling was afoot, and Nixon won a landslide reelection victory. As Leon Neyfakh put it in the first season of Slate’s Slow Burn history podcast, which came out in 2017, major outlets’ early coverage of the burglary and its aftermath was often “muted, or deferential to the administration, or just kind of misguided.” Lesley Stahl, then a young reporter at CBS, told Neyfakh that her stories about the case never made the air; writing for CJR at the time, Ben Bagdikian took top DC bureaus to task for failing to assign a full-time reporter to the Watergate story in the run-up to the election. The Post ran many Watergate stories, of course—but the historian Rick Perlstein told me in a 2020 interview that when it did so, it would often also hype “some trivial supposed sin” of George McGovern, Nixon’s Democratic opponent in the election, in a bid for balance.

The Watergate coverage that did come out, Neyfakh says, often seemed not to register with the public as a major campaign issue—even after Walter Cronkite, the CBS titan, devoted a large part of one of his evening newscasts to the story less than two weeks before the election. After Nixon won, even Woodward and Bernstein “hit a drought,” in Neyfakh’s words. Sussman recalled the post-election period as a “very difficult” one for the Post, which received hostile letters accusing the paper of acting as a stooge for McGovern. (Sussman claimed to Neyfakh that Woodward suggested the Post drop the story altogether. Woodward said he didn’t recall this; by the time Slow Burn came out, Sussman had decisively fallen out with both Woodward and Bernstein, telling Shepard, the Watergate scholar, that he didn’t “have anything good to say about either one of them.”) In Neyfakh’s telling, it would take an explosive 1973 letter from James McCord, one of the Watergate burglars, to turn the story into the national obsession we remember today.

Nixon and his aides, for their part, might not have used the phrase “fake news,” but they did rhetorically bash the press and much, much worse. Donald Graham recalls Nixon secretly orchestrating regulatory challenges to two TV stations that the Post owned. Top officials in his White House went as far as plotting to kill the famed columnist Jack Anderson, abandoning that plan to instead focus on the Watergate break-in, as Mark Feldstein reported this year.

And, while Fox would not come on air for a further twenty-four years, Nixon aides including a certain Roger Ailes at least discussed plans for a “pro administration” TV presence as early as 1970, on the grounds that “people are lazy” and TV tells them what to think. “If Fox News had a DNA test,” The Week’s William Falk wrote in 2019, “it would trace its origins to the Nixon administration.” Also in 2019, with Trump on the cusp of his first impeachment, The Intercept’s Jon Schwarz made the case that leading figures in the conservative movement saw Watergate as the catalyst to build a system that would prevent a Republican president ever facing such consequences again, with right-wing media as one of its three prongs. As Perlstein reports in his book Reaganland, right-wingers with big media platforms—one of whom, Pat Buchanan, also worked for Nixon—had started, by at least 1977, to cast Watergate as a witch hunt.

When I interviewed Perlstein, I asked him whether he thought the emergence of a right-wing media ecosystem with Fox at its core had fundamentally changed the politics of the conservative movement since the seventies, and Perlstein replied that the story was one of both “continuity and change”; Fox is relatively new, he said, but the sort of discourse found there “was always present in American politics.” Continuity and change is a good frame for thinking about history more generally; when applied to the anniversary of Watergate, it can help us to slice through some of its accumulated mythology, or at least see it with more nuance. In a smaller sense, Sussman’s death, with its sadly resonant timing, helps us with this task, too. As Benton put it, Sussman was “uniquely shortchanged by the transformation of the Post’s Watergate coverage from news story into cultural artifact. The real history got processed into something more easily digestible, and Barry wasn’t in it.”

Below, more on Watergate:

A call for submissions:
For over eighty years, the duPont-Columbia Awards have set the standard for audio and video journalism in broadcast, documentary, and online. Have you done important work from July 1, 2021, to June 30, 2022, that features deep original reporting in the public interest? Enter now for the chance to win a duPont Silver Baton. An in-depth entry guide/FAQ is available here. Have questions? Contact [email protected].

ICYMI: All the news that’s eye-wateringly expensive to print

TOP IMAGE: at the gate Tourists read the day’s headlines outside of the White House on August 8, 1974, only a few hours before President Nixon would resign on air. (Bettman/Getty Images)