As far back as I can remember, I have known exactly what I wanted my job to be. I worked at my grade school newspaper (shout-out to The Bobcat Chat), then my high school paper, then my college one. My first car carried a support press freedom bumper sticker, and my most-prized Christmas present as a kid was a knee-length tan trench coat, to match the ones I saw the foreign correspondents wearing on TV. (Never mind that I grew up in the desert of West Texas, where a trench coat was the single most impractical piece of clothing you could own.)

My parents, then political conservatives who watched Richard Nixon resign from office when I was 10, would justify my interests to their friends as such: “This is our son, Kyle. He wants to be a journalist. (Beat.) But he’s not like all of those other journalists out there.”

ICYMI: What my 18 months as Jared Kushner’s first editor taught me about the Trump family and the press

In fact, I wanted to be exactly like all of those other journalists out there and would spend the rest of my working life making it so, carving out a career that took me through local newspapers to national dailies to glossy magazines to, now, the editorship of the publication you’re reading. (In between, in the 1990s, I worked as a foreign correspondent in London, where my trench coat dreams came true.)

Today, I find myself thinking a lot about the 10-year-old kid, or the high school newspaper editor, or the college graduate looking for a way into working journalism. Or, increasingly, to the veteran editor with one wary eye on the next round of layoffs. How can they find a way to do that thing they’ve always wanted to do? Is there even a career path in journalism anymore? Who can afford to be a reporter, anyway?

Being a working journalist is, of course, a job. Someone pays us to write or talk or edit other people’s words. But it is also, as long as I’ve been doing it, an identity. And it is that sense of identity that is being tested and strained—and, at times, buttressed—by the moment in which we live.

Let’s first dispatch with the bad news, which you already know: The jobs picture in journalism is terrible. Since 2005, newspaper employment in the country has fallen by more than 50 percent. And while print jobs have taken the biggest hit, the employment picture has darkened in radio, TV, and, recently, digital media as well. News companies continue to cut their most senior (and best-paid) people, and lower levels of hiring have made what had been a tight market for new arrivals even more brutal. If you do manage to land a job? The pay is dismal, with the starting median salary for a reporter stagnating at $34,150.

All of which leads us to ask: Who in their right mind would want to go into this business in the first place? That, essentially, is the question we have set out to answer in this issue of CJR.

Being a working journalist is, of course, a job. Someone pays us to write or talk or edit other people’s words. But it is also, as long as I’ve been doing it, an identity, as much a part of who I am as being a father or a husband or a New Yorker. (Sorry, kids.) And it is that sense of identity that is being tested and strained—and, at times, buttressed—by the moment in which we live.

It’s impossible to be a journalist today without the sense that our work carries extra weight. When the president calls us enemies and liars, and his supporters across the country and around the world echo his talking points, it’s hard to escape the sense that doing our job has a new element of risk. Even if we’re simply reporting on high school football scores or the opening hours of the local library, the act of doing what we do has a renewed tinge of the oppositional, maybe even the transgressive. How could it not, when the very fact of our profession is being held up in some quarters as a sign of dishonesty and disloyalty?

Like many other journalists I know, I’m attracted to the outsiderness of what we do, so this moment has me more invested in my journalistic identity than I’ve ever been. And I can wear that identity with confidence because of the amazing work and reporting I see all around me, in markets big and small, by journalists young and old. I’m also energized by the subscribers and scholars and even celebrities who see this moment as a rallying cry for a much bigger (and apparently much-needed) conversation about the critical role of a free and vibrant press in a democracy, even if you don’t happen to agree with what’s being published. Given how few Americans seem to care on any given day about threats to press freedom in this country, the First Amendment is a much more fragile thing than any of us had previously realized.

ICYMI: ‘This deepening division is not inevitable’: The failing diversity efforts of newsrooms

For students of journalism history, from The Front Page to the Daily Bugle, the dismal journalism jobs picture is familiar. For decades in America, reporters were working-class troublemakers, the kind of people who would walk into a room (or, more often, a bar) and prompt everyone else in the place to groan.

Then, beginning in the late 1980s, journalism became professionalized. Reporters snagged book deals. They started appearing on TV. Their salaries climbed. That sense of being an outsider faded away. In fact, it was insider cred that a lot of these people most craved.

Before long, journalism became cool. And people who in previous lives may have been lawyers or bankers or doctors, people who wanted to have a career with a splash of glitz, became journalists instead. That old sense of identity, of mission and of purpose, was gone. The dilettantes blended in with the true believers.

Now we’ve come full circle. Terrible pay for reporters, a shortage of jobs, even a social stigma in some circles have filtered the business to the point that most of the journalists I meet—and especially the young people trying to get into the field—are here because they desperately want to be here, and can’t imagine themselves anywhere else. They are exactly where I was, four decades ago.

How, then, do we get them from here to there, from principled dreams to a paying job?

As we chronicle in this issue, there’s a lot wrong with the state of the journalism job market. It still favors white, privileged, highly educated people at precisely the moment it needs to be more inclusive, given the changing demographics of the country. It’s classist, populated with members of the same social strata, at a time when it should be more open to people from different economic backgrounds. It discounts age and experience when mentoring and life skills are critical. (And I’ll leave it to our writers in this issue to debate the merits, and demerits, of journalism education, which, depending on your worldview, is either insidious or indispensable, but is without a doubt enormously expensive.)

The hiring choices we make now will shape the journalism that follows.

You’ll read about how the push for productivity has vastly expanded journalists’ skill sets, but at a potential cost in the quality of what we do, and about how the financial demands of working in journalism today often require people to take second or third jobs to subsidize the work they love. At what point does your passion become its own kind of punishment?

And yet people continue to pour into the business, many returning to journalism from careers elsewhere, because they believe in what we do. Digital tools are spawning new journalistic entrepreneurs, and innovations in data visualization and AI and podcasting are giving rise to rich new forms of storytelling, finally matching the ambitions of new reporters with the tools they need to tell their stories.

The challenges of the job market, and the questions they raise for all of us, are not inside baseball; they get to the heart of what journalism is and should be. We shouldn’t treat those obstacles as fringe concerns, to be untangled while we try to keep the lights on and the presses rolling. With fewer job openings, every hire becomes that much more important, both in terms of creating the workforce that best serves our calling, and in recognizing the loss that comes with every dismissed worker. The hiring choices we make now will shape the journalism that follows: Do we focus on filling as many of the existing slots we have, or do we instead reimagine our newsrooms and the beats they contain? Should we continue to cover incremental, breaking news, or should we instead steer our resources toward more ambitious accountability reporting? At a time of severe budget constraints, can we afford to continue pouring money into soft-feature sections and service journalism that has, in many cases, become a commodity?

We are in a moment of our industry’s professional life that we can’t afford to squander. We are surrounded by eager, committed, energized colleagues, the majority of whom hear a calling that had either been quieted or silenced. It’s ringing loudly now, in newsrooms around the world.

Decent Work if You Can Get It

Employment in newspaper publishing has plummeted in recent years—almost half of reporter and correspondent jobs have disappeared since 2005. For those who remain, the financial picture isn’t exactly rosy: Below, a sampling of major metropolitan areas shows a wide range of median salaries. 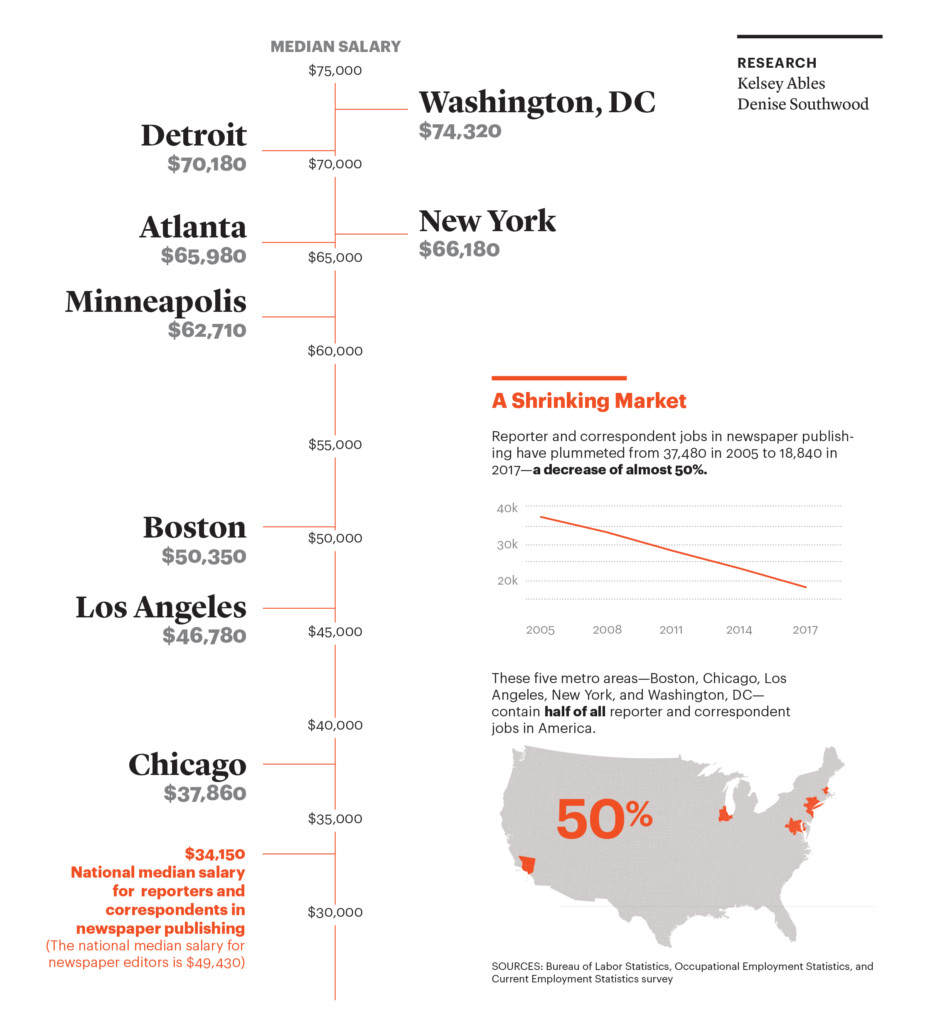 ICYMI: An open letter to Trump from the US press corps