This article was featured in the Tow Center for Digital Journalism’s weekly newsletter. Subscribe here to stay up to date on our latest events and publications.

For four months, two out of every three news articles posted to the official Facebook page of an Ohio gubernatorial hopeful have gone to sites run by pseudo-news network Metric Media, a Tow Center analysis shows.

With May 3’s gubernatorial primary looming, Jim Renacci, a former congressman whose team is touting him as the state’s “only Trump candidate,” has consistently pushed a stream of beneficial stories published by the shady local “news” network whose emergence, expansion, funding, and political ties the Tow Center has been investigating since 2019. Allegations that it was a “pay for play” operation were made in the run-up to the 2020 general election.

Renacci’s pattern of posting was reported by Cleveland.com earlier this month following a Twitter thread by Adrienne Goldstein of the German Marshall Foundation. The report stated that Renacci’s Facebook page had linked to Metric Media sites “more than 50 times.”

Per the Tow Center analysis, this underplays Renacci’s penchant for promoting Metric Media stories. At the time of the Cleveland.com story, Renacci had in fact linked to Metric Media sites 68 times in just over three months. By April 24, that number had grown to 82.

Using CrowdTangle, the Facebook-owned analytics tool, we analyzed links posted to Jim Renacci’s official Facebook page (@JimRenacci) between Monday, August 16, 2021, and Sunday, April 24, 2022 (inclusive). This period was chosen as it facilitated a comparison of two 18-week periods before and after Monday, December 20, 2021, the beginning of the week that Renacci began consistently sharing links from Metric Media outlets. To home in on news articles, we filtered the data set for links (removing photos, videos, etc.) and removed links to Renacci’s own website, Facebook, and event listings. This resulted in a data set of 139 links shared via Renacci’s Facebook page. Data on Facebook engagement was collected via the Facebook and CrowdTangle APIs.

According to the Facebook Ad Library, Metric Media LLC spent $530 promoting this story to 200,000–250,000 Facebook users in Ohio between December 24, 2021, and January 7, 2022. This is one of just two Buckeye Reporter articles that Metric Media LLC has paid to promote on the platform. 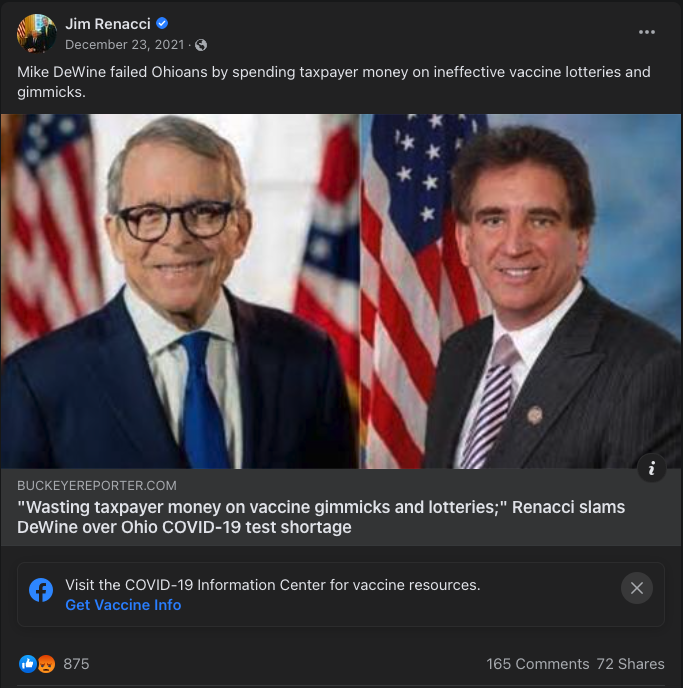 The extent to which Renacci came to depend on Metric Media stories is demonstrated by a comparison of his link-sharing activity in the 18 weeks either side of Monday, December 20, 2021. Between August 16, 2021, and December 19, 2021, he shared twenty stories via his Facebook page. All but one came from sites unrelated to Metric Media. Renacci did not appear partial to any particular source during this period, sharing stories from fourteen different domains. 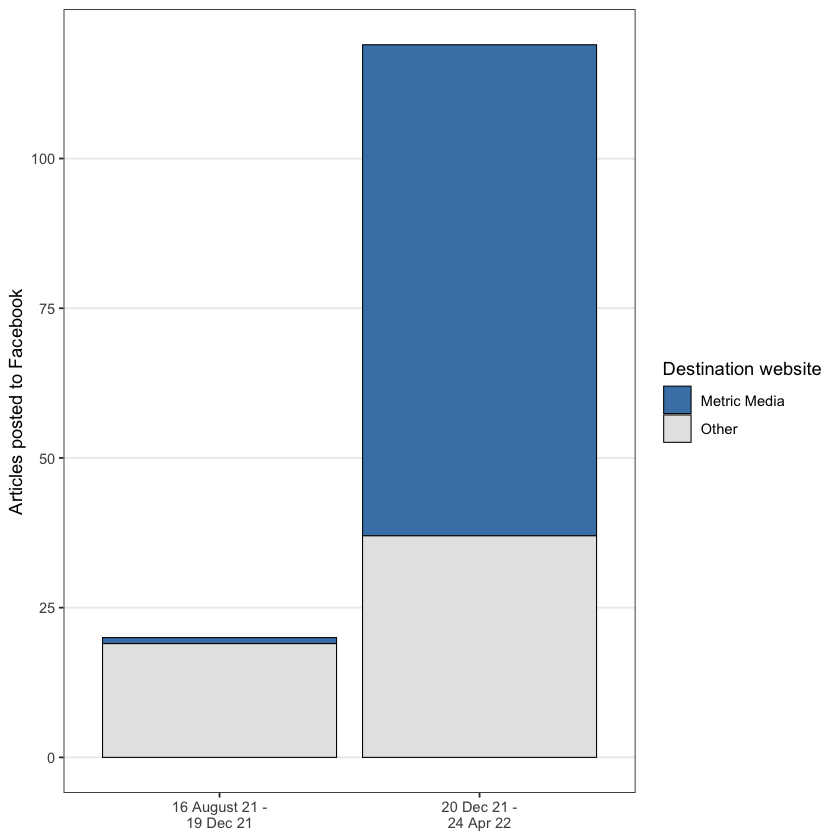 From December 20, however, Renacci’s posting frequency increased sharply—largely driven by useful coverage from Metric Media sites. He posted 119 links to his Facebook page between December 20, 2021, and April 24, 2022. Of these, 82 linked to stories published by Metric Media properties (69 percent).

In other words, more than two out of every three stories posted to Renacci’s Facebook page since December 20, 2021, have been favorable pieces produced by Metric Media. 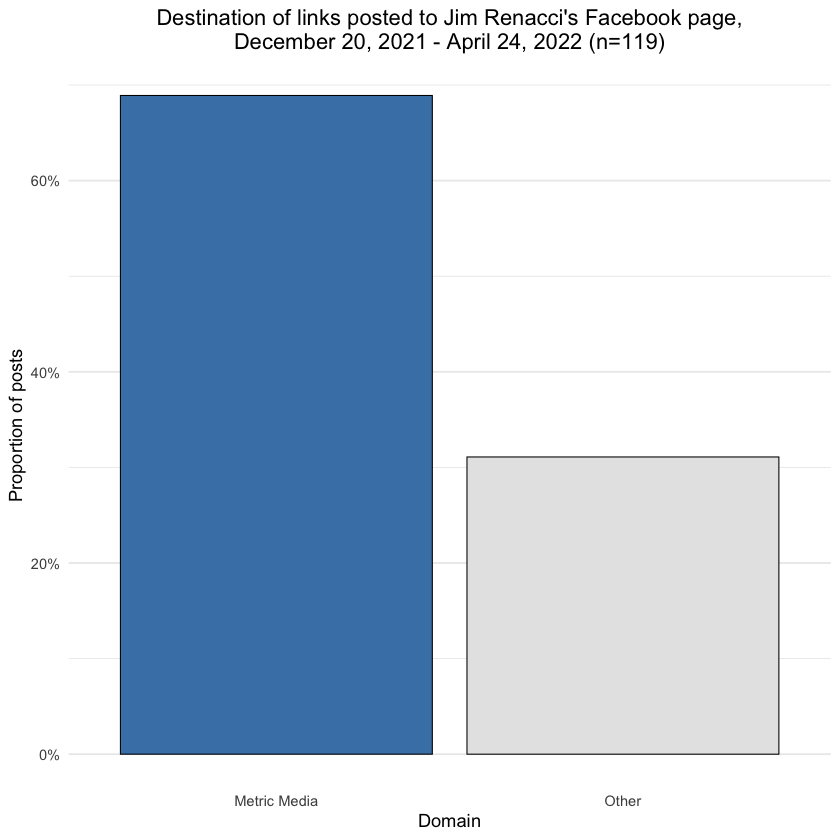 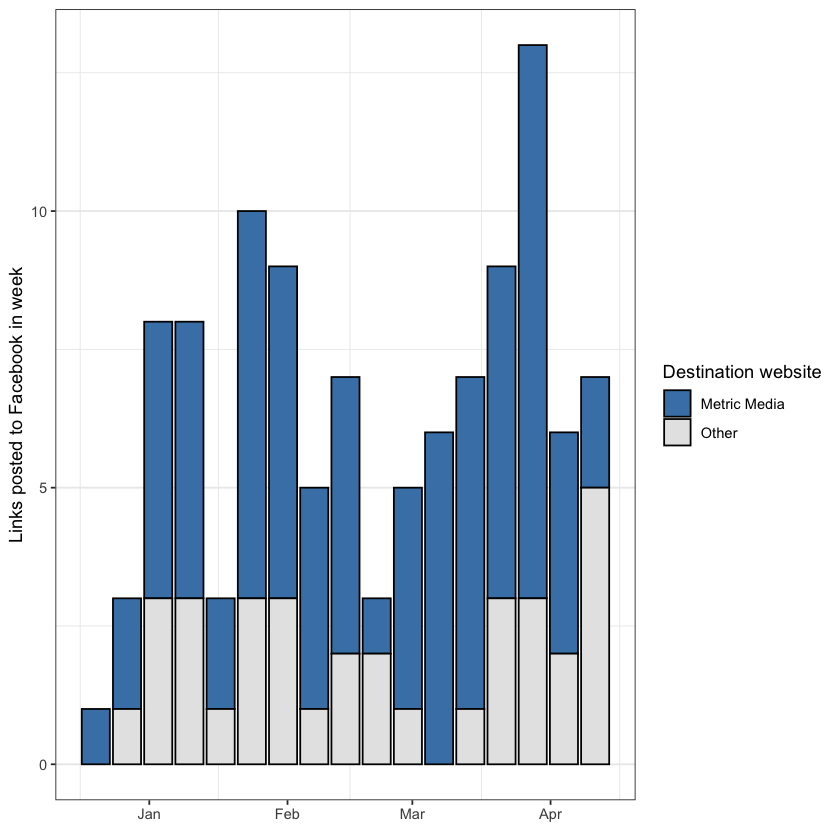 Chart: Links to Metric Media sites outnumber links to other sites most weeks.

The extent to which the proliferation of Metric Media stories has led to a surge in link sharing on Renacci’s Facebook page since December 2021 is illustrated below (the dotted line marks December 23, 2021). 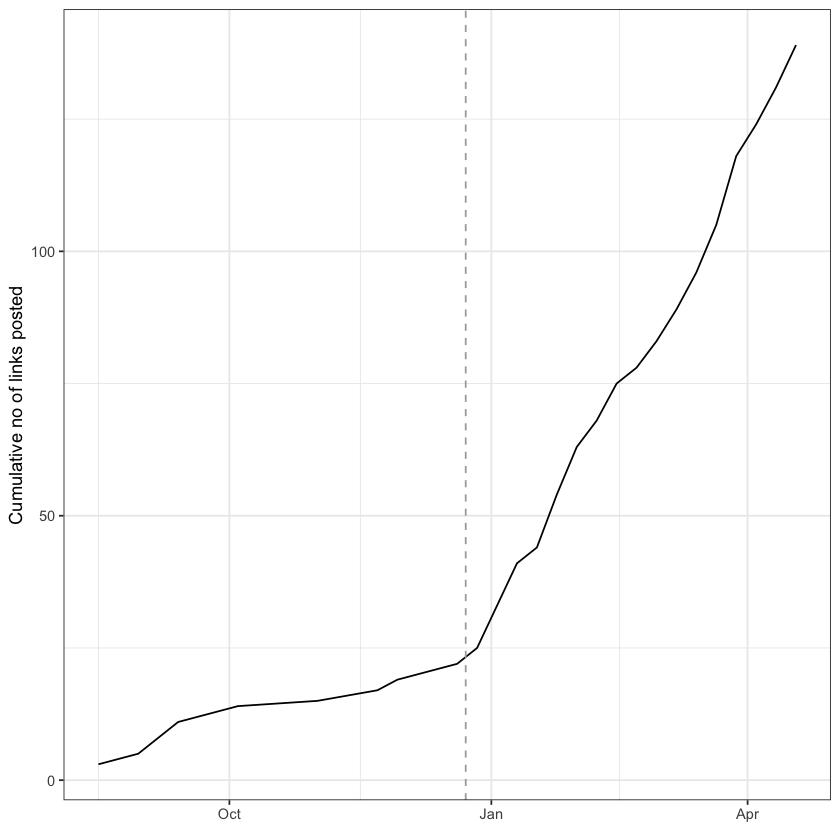 Cumulative number of “news” stories Jim Renacci has linked to from his official Facebook page since August 16, 2021.

These articles seem to serve a few purposes. First, they create the impression Renacci is generating a lot of organic press coverage, which can then be cross-promoted via his campaign website and other platforms.

For example, linking to a Buckeye Reporter story in which he “slammed Ohio health officials and Gov. Mike DeWine,” Renacci’s campaign website published a blog—“ICYMI: Renacci Makes Headlines with Demand that DeWine Condemn ‘Child Abuse’ Mask Mandates on Kids”—that noted “statewide outlets” had “picked up” on his comments. Another “ICYMI” blog regurgitated another Buckeye Reporter story.

Additionally, these articles provide a platform for Renacci to promote his core talking points. Our analysis shows that 62 of the 82 Metric Media stories pushed via Renacci’s Facebook page—74 percent—carried his own quotes in their headlines.

Some have amassed what is, by Metric Media’s standards, high engagement on Facebook. Three have run up over 10,000 interactions: 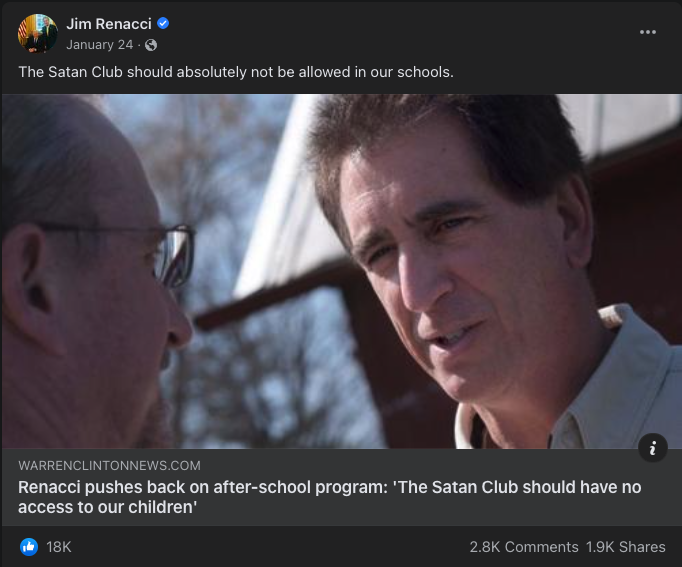 The Metric Media story with the most interactions on Jim Renacci’s official Facebook page. 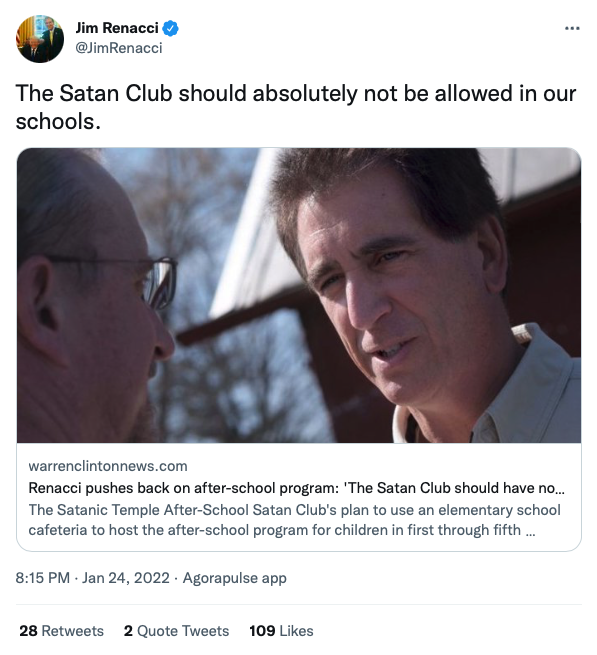 Overall, the Metric Media stories to which Renacci has linked have garnered a total of 180,426 interactions across Facebook:

Of these, 169,382—or 94 percent—have been generated by Renacci’s posts. In other words, these “news” articles have not generated any meaningful engagement on Facebook beyond Jim Renacci’s own page. The page that has generated the next highest total is “Ohio Value Voters Inc.,” which has garnered 1,177 interactions across eleven posts linking to pro-Renacci Metric Media articles.

A penchant for the Buckeye Reporter 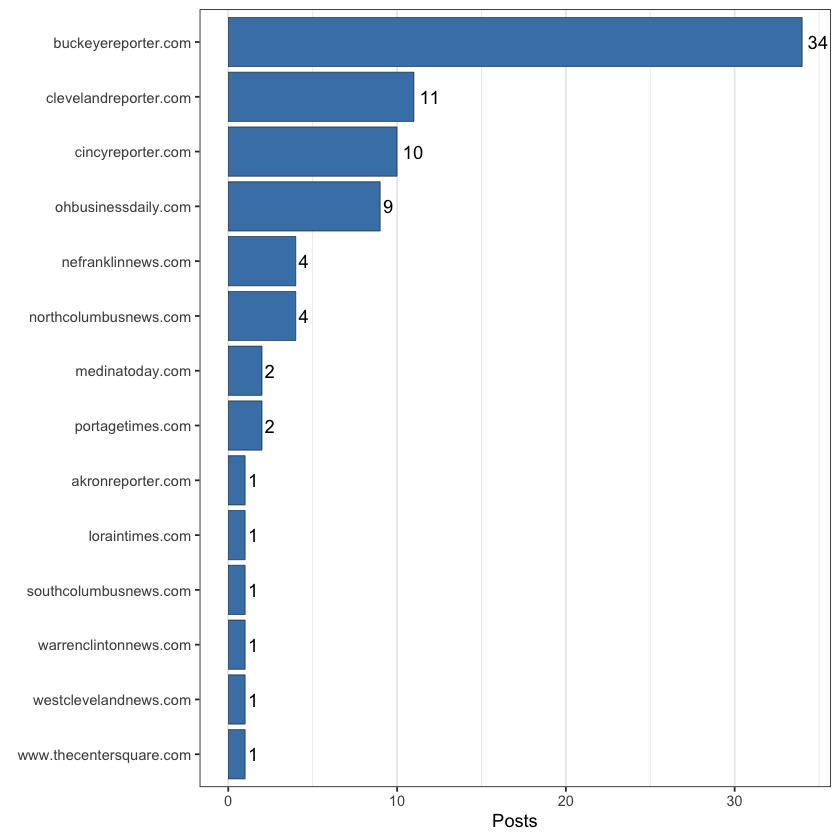 Chart: Metric Media sites to which Jim Renacci has linked from his Facebook page.

The Buckeye Reporter is among the initial slew of Metric Media sites that first attracted attention in 2019. Its domain, buckeyereporter.com, was created on June 30, 2019, according to icann.org. It is categorized as a media/news company on its Facebook page, but has not made any posts since uploading a profile picture and cover photo on June 26, 2020. As of April 25, 2022, the page had been liked by five people and had six followers. Buckeye Reporter does not have a Twitter presence. 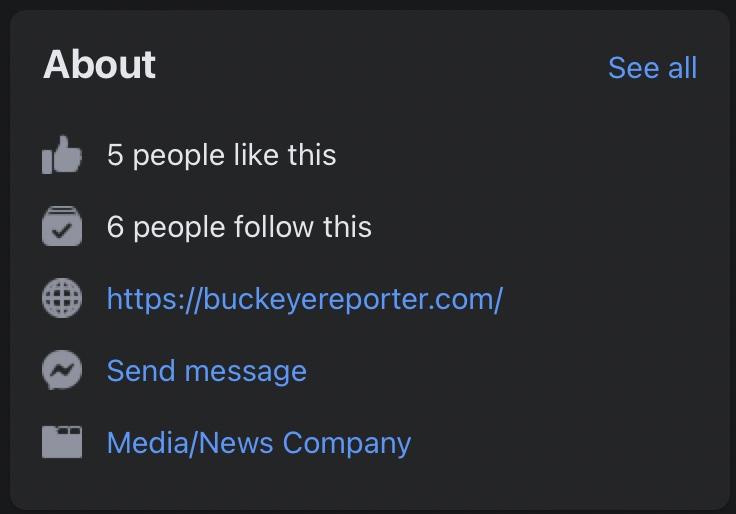 According to the boilerplate About Us page on the Buckeye Reporter website, Metric Media’s “approach is to provide objective, data-driven information without political bias. We provide 100% original reporting, including to share as much data as possible from government and other publicly available sources.”

Despite this, one does not have to dig very deep to find notable disparities between coverage of Renacci and incumbent governor DeWine.

As of April 25, the Buckeye Reporter had ten stories tagged as containing references to DeWine. Of these, nine contained attack lines from Renacci in the headline (e.g., “Renacci: DeWine is ‘a nightmare for Ohio families, and now he’s paying the price’”). The other, which is headlined “DeWine ‘unhinged’: ‘I’ll kick your a**,’” dedicates considerable attention to Renacci. It also reports that Joe Blystone, the target of DeWine’s alleged threat and one of Jim Renacci’s political opponents, “was accused of bad behavior in the exchange, which is not off brand.” 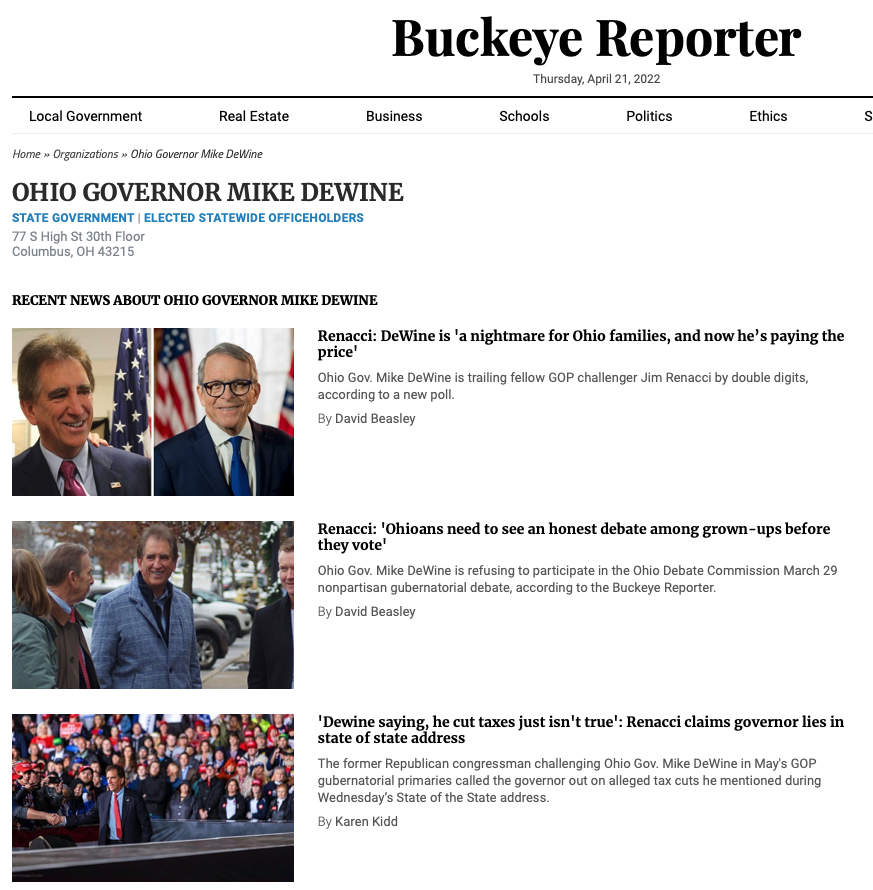 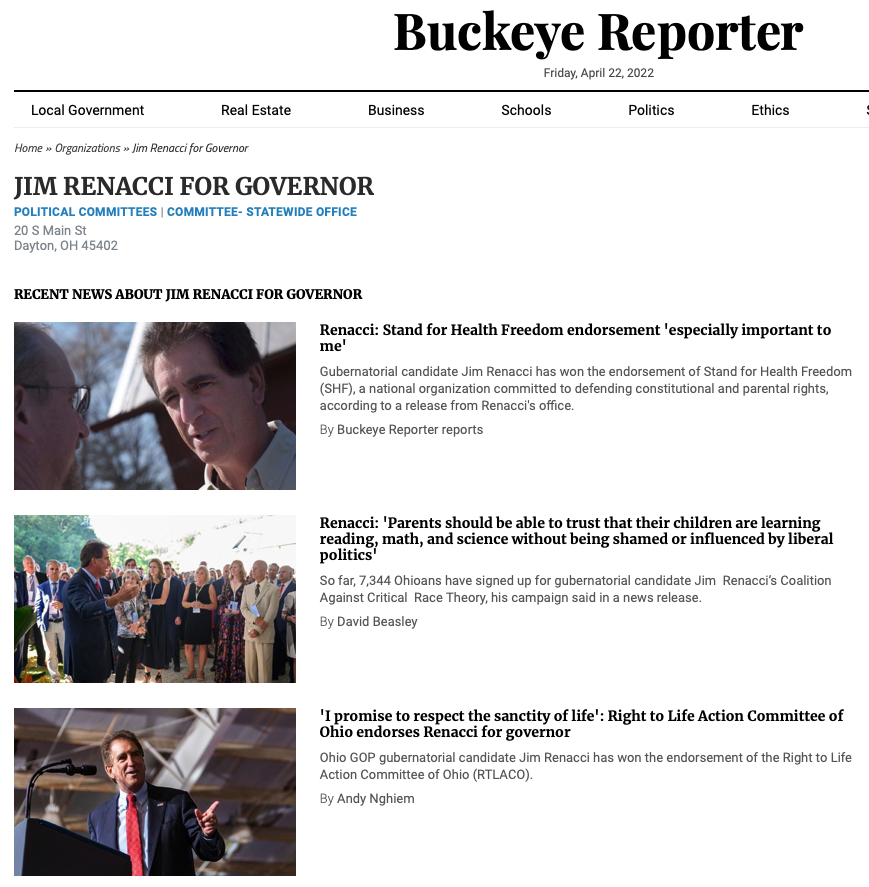