The “something big,” according to PBS and other media outlets, is growing grassroots resistance among parents and students to a new set of tests being administered nationwide for the first time.

But so far, at least, much of the media’s coverage of this spring’s Common Core testing rollout has been guilty of over-emphasizing the extent of the conflict, speculating dire consequences based on little information, and over-relying on anecdotes and activists’ claims rather than digging for a broader sampling of verified numbers. The real story–that the rollout of these new, more challenging tests is proceeding surprisingly well–could be getting lost.

The tests under scrutiny were developed in conjunction with the Common Core State Standards, which the nation’s governors produced and President Obama has since supported. But since their creation in 2009, those standards and the new tests have become controversial among some conservatives as well as liberals, including some teachers and parents.

There’s no doubt that this spring’s Common Core testing is a big story. According to the AP, roughly 12 million students in 29 states plus DC will take the new tests. But looking at recent national media coverage, you’d think the whole Common Core enterprise was about to come crashing down.

Reality isn’t so clear. Efforts to convince state legislatures to roll back the standards and tests have fared poorly, as Politico recently noted. Last year’s trial run with the new tests generally went well, technically and otherwise. Parents’ willingness to opt their children out of the tests has been high in just a few schools and smaller school districts. Only a handful of teachers have endangered their jobs by refusing to administer the tests.

So the collapse of the Common Core and its tests may happen at some future point, but it isn’t happening yet–despite overheated coverage. I’m not the only one who thinks so:

“What’s missing from the journalism, and from the public’s understanding, is that students have long sat through hours of tests that their teachers may or may not find useful in helping teach better,” says former Education Writers Association public editor Linda Perlstein, who currently consults for clients including the pro-Common Core Gates Foundation. “People are blaming a lot on the Common Core, and reporters aren’t always critical and analytical enough in response.”

It’s not so much that the coverage includes factual errors (though there are some chronic problems on that front). Nor is it that reporters are being barraged with emails and tweets from testing opponents (though that’s happening as well). The real challenges are that instead of two simple “sides” for readers and reporters to choose from, there are multiple players with all sorts of views and interests–from parents and teachers to conservatives and liberals.

Then there are various technical glitches around the country that are hard to describe without over-generalizing, and the lack of timely information from districts and state education agencies that forces reporters to rely on anecdotes and advocates’ claims (about, say, opt-out numbers).

The March 11 PBS NewsHour segment illustrates many of these issues.

Co-host Judy Woodruff introduces the opt-out movement as a rebellion brewing in New Jersey and elsewhere and says if reports of students opting out keep building, “it could endanger the goals of the standards themselves.” According to PBS, anti-testing protests were occurring in New Jersey “just about every night, often with strong language.” And New Jersey wasn’t alone. Anti-testing efforts were taking place in Florida, New York, Washington, and Colorado.

“How strong is this grassroots test refusal movement?” asks correspondent Merrow. “Politicians are paying attention. Twelve states have already dropped the Common Core tests. And others are considering it.”

There are a few problems with the news segment. The opening footage showing Newark students protesting the local school board suggests that the new tests are a main concern of the protesters, when all previous reports have them rallying primarily against Christie-appointed Newark school superintendent Cami Anderson. Eleven of the 12 states that “dropped” the official Common Core tests have developed their own similar assessments, according to right-leaning think tanker Mike Petrilli. And–perhaps most problematic–the piece speculates about the future of the entire endeavor based on vague assertions about parents opting out without any hard numbers. 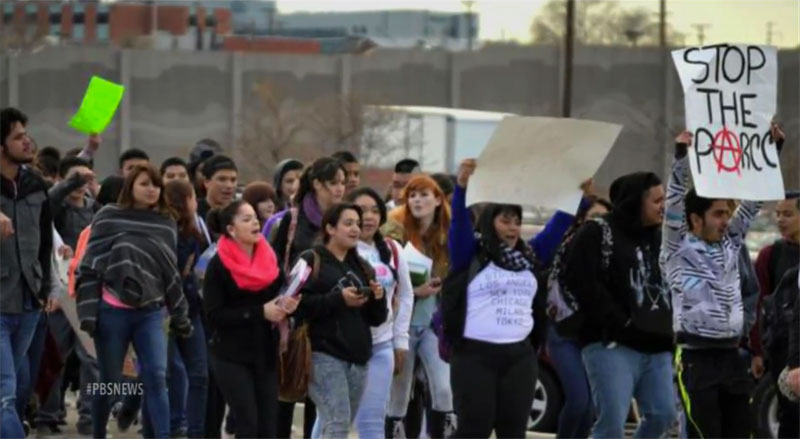 Students march in a still taken from the PBS NewsHour special.

It’s as if someone told you that there were reports of violence in the Middle East that could, if they grew, result in the downfall of a nation. You’d want to know: How much violence? Where? For how long? Has this ever happened before?

The PBS segment isn’t alone in sharing some of these issues.

The Associated Press kicked off national coverage of this year’s Common Core testing with a Feb 17 story previewing the coming tests (Ohio Debuts New Digital Standardized Test This Week). However, it focused primarily on the controversies surrounding the standards and the mishaps that might potentially occur, mysteriously ignoring the previous year’s “field test” of the new assessments that had taken place in 2014 (and had generally gone well.)

A March 7 Washington Post story begins with the observation that “A growing number of parents are refusing to let their children take standardized tests this year.” However, there’s no mention that mostly affluent parents are doing the opting out. That the opt-out trend “remains a tiny minority nationwide” is buried low down in the story.

A New York Times March 2 piece describes the opt-out movement as well-organized in New Jersey and elsewhere, leading to a “cascade of parental anxiety.” To the reporter’s credit, the piece includes a mix of responses from local administrators to the controversy, closing with a nuanced observation about a parent who signed a Facebook petition against the tests but is still going to have her daughter take them.

Testing critics are generally pleased with the attention and coverage they’ve been getting, though some feel that there’s too much unchallenged fear-mongering coming from the other side. “One area of weakness is a pattern of reporting fear-mongering statements by public officials about possible sanctions from test opt-outs/boycotts without checking their veracity,” says FairTest’s Bob Schaeffer, whose organization monitors standardized tests nationwide.

For his part, PBS’ Merrow defends including the Newark footage and the omission of the union’s activities. “Because [the Newark students] had more than one issue (quite a few, actually), does that disqualify them from being in the piece?” he wrote in an email to me. The union’s role in encouraging parents to opt out is inaccurate, he says. “We did not see strong evidence that the union was calling shots or pulling strings.” About the lack of hard numbers, Merrow notes that the piece acknowledges their absence at the end of the piece but couldn’t do anything more.

True enough, there is no statewide real-time data source tallying the numbers of students opting out of testing, and perhaps there should be. But at least some of the information from districts was reported by local papers. (Reporters from the NYT, Washington Post, WSJ, and AP did not respond to emailed requests for comment.)

There are some clear ways to minimize the issues around the Core.

Claims about opt-out numbers need to be verified through official sources (even if it means calling districts individually, as some reporters and bloggers have done). Wherever possible, reporters should find some way to give numerical context (i.e., in percentage form) rather than raw numbers, whose significance is hard to grasp. Speculation–especially one-sided speculation–should be treated like it is, one-sided.

Avoiding journalistic ambiguity would help. Readers can’t realistically be expected to know that “a small but growing number” could mean pretty much anything, that “across the nation” isn’t the same as nationwide, and that protests coming from “across the spectrum” doesn’t necessarily include moderate, middle-of-the-road organizations like principals’ associations.

There’s no question that something big is happening in New Jersey and around the country, but it’s not what most reporters are describing. Kids in New Jersey will take an estimated 90 extra minutes of testing compared to previous years. Roughly 250,000 kids are taking the tests every day. For the most part, the large-scale snafus that have been predicted do not seem to have occurred, did not take place last year during the trial run process, and should not continue to be reported until they actually take place.

Has America ever needed a media watchdog more than now? Help us by joining CJR today.
Alexander Russo is founder and editor of The Grade, an effort to improve the quality of mainstream education coverage, in partnership with PDK International. He is the author of Stray Dogs, Saints, and Saviors, which chronicles the attempted rescue of South Central LA’s Locke High School. His previous pieces for CJR can be found here.