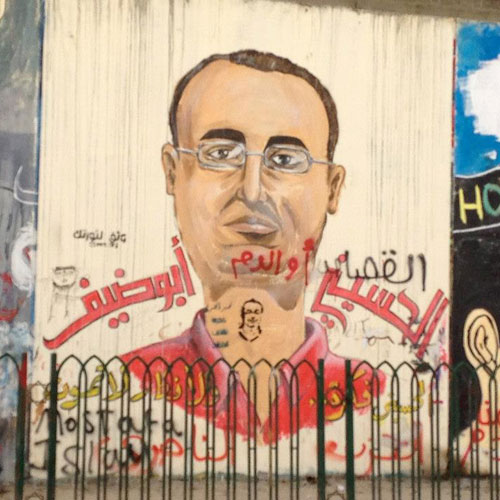 YEHIYA QALLASH, AN EDITOR AT EGYPT’S state-owned newspaper Al-Gomhouria, has a reputation as a government critic. He also recently became president of the Egyptian Journalists Syndicate at a time when attacks on the press in Egypt have risen to an all time high. In his two-year term, Qallash will have to navigate the uneasy waters of post-revolution Egypt: The old dictator is out, a new one seems to be settling in, and many trappings of an earlier era remain, including considerable challenges to media change.

The Egyptian Journalists Syndicate (EJS) is the official body tasked with organizing, protecting, and accrediting Egyptian reporters and editors (and sometimes others, like lucky ad men) at private and government-run newspapers. When you hear of Egyptian journalists being censored, fired, intimidated, detained, attacked, or killed, the syndicate is the go-to place to lodge and resolve these grievances.

In today’s Egypt, it has been largely failing at that. Trials are farcical and deadly. Police brutality is rampant. The government, devoid of real checks on its power, is free to call anything journalistic a crime. For all these reasons, it’s easier for the syndicate to keep going through the motions of fighting for press freedom, rather than take on the deeper problems that plague the profession, and Egypt itself.

It’s one of Egypt’s many Catch 22s: In 2011, street protests ousted longtime President Hosni Mubarak and raised hopes for change; but the aging body for defending journalists and resisting censorship remains part of the same repressive political system that restricts media freedoms, along with most others. The reactionary character of the syndicate helps explain why political and media change in Egypt remain so elusive, despite all the revolutionary rhetoric.

Still, the local press greeted Qallash’s election in March with great fanfare. He beat out the incumbent and government pick (a not so common feat), who had angered many by appearing too aligned with the state at the syndicate’s expense. Protesters demonstrate against the Saudi-led bombing campaign in Yemen outside the Egyptian Journalists Syndicate headquarters in April. (Photo: Miriam Berger)

After two years in power, Sisi now appears less a change agent and more a reincarnation of Mubarak, who ruled Egypt for over 30 years. Under Sisi, Mubarak-era media and political restrictions are back in full force. It seems a total retreat from the euphoria of the 2011 uprising, when expectations rose fast that with Mubarak’s ouster, the state’s pillars of repression, media control included, would easily collapse.

Instead, risks to Egyptian journalists are growing. At least seven have been killed since 2013, and hundreds more have been injured or arbitrarily detained. Political intimidation and self-censorship run rampant in news organizations that offer journalists little in the way of professional support or standards.

This doesn’t bode well for Qallash. He’s been considered one of the “good guys” in the syndicate for years. But his fighting rhetoric contrasts with what many see as an unfortunate reality: the journalists’ union, like the Egyptian government, is a politically co-opted mess.

Often, the EJS appears to be doing its job: It files court cases, issues press statements, trains journalists, and holds small demonstrations (which, as of 2013, require a state-issued permit). But inside the historic body tasked with defending journalists’ rights and responsibilities, the dream of greater freedom has been repeatedly deferred.

“The revolution of January 25 [2011] did not move from Tahrir Square to Adb El-Khalik Tharwat Street [the syndicate headquarters],” Qallash told me this spring, seated in his expansive syndicate office in a tan suit. It was, he noted, one of his trademark phrases.

Qallash has been preparing for his position for years. He’s held various leadership roles, and cultivated the respect and allegiance of many journalists and syndicate members. All the while, like much of the syndicate leadership, he has continued working at government-owned newspapers, currently as an editor at one of the state’s historic propaganda machines. Now, Qallash, like many entrenched politicians of the Mubarak era, is calling for change for the sake of Egypt’s youth.

“It is important that we restore confidence in the work of the syndicate, especially for the young journalist generation,” Qallash said. The problems of the “youth,” he said, were part of what pushed him to run.

“There are many hardships because the work of the syndicate in the recent period has faced several deadlocks,” he added. “There are many important cases that have piled up. Nothing was accomplished.”

Qallash was referring to the many files of complaints from disgruntled journalists: some have been harassed, detained, and abused by police, others fired from or exploited at their jobs. Then there are the more extreme cases, like that of Husseini Abu Deif, who was fatally shot by a sniper in Dec. 2012 while covering clashes between pro- and anti-Morsi supporters. His legal case remained stalled under Morsi, allegedly because the Muslim Brotherhood killed him. But under Sisi, Abu Deif’s case has remained unresolved.

For many among Egypt’s journalists, the near future looks bleak. In the two years since Morsi’s ouster, Sisi has initiated a wide wave of repression against the Brotherhood, revolution activists, political figures, and bystanders caught in between. The crackdown has put more than 40,000 Egyptians in jail, human rights groups estimate.

Still, Sisi consolidated power with the nearly cultish backing of state and most private media. He had to lead the coup and crackdown, goes the official state and media narrative, to save Egypt from the Brotherhood “terrorists,” and other regime critics, bent on “destroying” Egypt. Morsi was a polarizing leader, and he and his supporters were hostile and violent towards the media. But now Sisi’s rule has meant an even scarier unwritten list of taboo topics, chief among them support for the Brotherhood and criticism of Sisi or the military.

Four years of political upheaval have shaken the syndicate. They have also made many journalists, reared in a politicized media space, more wary of what further change might bring.

When the Egyptian military violently dispersed a pro-Morsi sit-in on August 14, 2013—killing nearly 1,000 protesters and four journalists—the EJS did not condemn the violence. Months later, one of the syndicate’s 12 board members, Abeer Saady, quit to protest what she called the board serving as an “ethical coverage” for attacks on the press. In the months that followed, many accused then-EJS head, Diaa Rashwan, of doing more to protect regime interests than the lives of journalists. The cases of detained journalists who weren’t syndicate members, or of Brotherhood-aligned journalists jailed since the coup, remain sensitive to discuss. It’s one thing to criticize the detention of journalists in general; but the government, and much of the media, have worked hard to discredit those in jail, suggesting they are not what they seem.

Qallash, in contrast, campaigned against Rashwan on a promise to protect all journalists. Soon after he was elected, he met with some of the families of the Muslim Brotherhood-affiliated journalists jailed since the 2013 coup. It was a largely symbolic move, though one his predecessor never took.

“The syndicate is not just responsible for its members,” Qallash told me. “It is also responsible for the organization of the labor market, meaning that [for] any journalist, in training or practicing, the syndicate must provide an umbrella of protection.”

But the syndicate’s own outdated rules forbid this. To be a syndicate member, a journalist must work full-time at a print organization, leaving thousands of television, radio, visual, part-time, and freelance journalists without any legal recognition. At the same time, decade-old laws forbid alternative unions, while politicized syndicate rules further limit membership via newspaper quotas and de facto political litmus tests. Most members work at state-owned newspapers, including some from advertising or other non-journalistic departments. It makes sense that most of those who attain membership, a requirement for press accreditation and access, are not looking to shake up the status quo or share their benefits.

The badel, a monthly government-subsidized stipend, is one of these perks. It’s also a fairly upfront form of government bribery. The Egyptian government gives all members of the EJS a stipend now set at $185 (or 1,400 EGP) per month, a practice that has been going on since 1987.

Over the last two decades, each election cycle, the EJS leadership candidate closest to the government has promised to raise the monthly handout, knowing that the government will step in to cover the cost. In this way, the regime tries to control who becomes syndicate president, and to shape that leader’s policies, while reducing the pressure on news organizations to pay workers a decent salary.

Qallash has criticized the badel as a “temporary bandage” to ameliorate the profession’s low salaries. But traditions are hard to break: When he won the election, he raised the badel by 200 LE ($26). It has become “an expected right,” he said, “but it is not the real solution to the economic problems of journalists.” The badel is unsustainable—yet it’s also a lifeline for the in-crowd, so no one wants to be the one to cut it.

Qallash said he wants the syndicate to stay “unified,” meaning one syndicate for all journalists. Others see a different way forward—and their numbers are slowly growing. Since 2011, disgruntled journalists have formed three independent syndicates to represent some of the journalists the EJS still excludes, including one specifically for digital journalists.

So far, the alternative syndicates lack the funds and muscle to serve as a viable political alternative, or to provide perks like health insurance or deals on property that syndicate members in Egypt expect. They are also technically illegal: Egypt’s constitution mandates one syndicate per profession. Without the legal changes needed to gain recognition, never an easy task in Egypt, they can either merge with the EJS (a move opposed by many syndicate members), or continue to operate on their politically precarious parallel plane.

When I spoke with him, Qallash diplomatically dismissed the idea of creating multiple journalist unions. Instead, he proposed a “dialogue,” to present “a unified vision.” He’s one of the syndicate’s most liberal leaders in years. But he’s also committed to working within the syndicate’s conventional channels of power.

And therein lies the problem: It’s far easier and safer for syndicate members to complain about low pay, absent contracts, and poor training than to challenge the state’s official narrative that the Muslim Brotherhood, opposition voices, or just unlucky scapegoats, are terrorists bent on Egypt’s demise. That’s why media change, like real political change, is still so hard in Egypt.

Miriam Berger is a freelance journalist with a focus on the Middle East and international affairs.