Within the cardboard boxes and reams of microfilm that hold the last century of Pulitzer Prize-winning journalism lies a troubling story about a group of journalistic underdogs: the women and people of color who are being shut out of American journalism’s most prestigious award.

As the graphics in these pages show, the ranks of Pulitzer winners have grown more diverse, but progress has been so slow that the percentage of non-white winners over the last decade is essentially identical to the percentage over the last 100 years. The news is better for women, who, while still a distinct minority, are at least gaining ground faster, and winning Prizes in a range of categories often thought to be heavily male-dominated, such as investigative and international reporting.

The data illuminate other half-hidden patterns. We found that nearly a third of African-American Prizewinners have won for commentary. Our analysis of international Prizes suggests a narrow view of what counts as Prize-worthy in places like Africa and the Middle East. And art criticism is having a moment: It has won four Prizes in the last 10 years, more than any other subject in the criticism category.

To compile these data, two CJR researchers spent weeks analyzing winners over the past century. Determining their race and ethnicity proved the most challenging, since there are no official public demographics of winners. Our findings, we believe, represent the most complete data examining the gender, race, and ethnic identity of Pulitzer Prize winners.

We organized the race and ethnicity data according to standards used by the US Census Bureau and focused exclusively on named winners, so Prizes that were awarded to teams or entire newsrooms are not included here. To determine the race or gender of each of the 943 named winners, we searched news stories, archival photographs, and historical records, and contacted some news organizations. We also reached out to affinity groups such as the National Association of Hispanic Journalists and consulted lists of minority and female winners compiled by organizations like the Maynard Institute for Journalism Education.

Despite these efforts, it was not possible to confirm the race and ethnicity of every winner. Records before 1960 are sparse, but we do know that very few minority journalists won in the early part of the 20th century. Journalism associations and other groups have recorded the first African-American and Asian winners, and our own research located other early minority winners. If we could not independently determine otherwise, any winners before 1960 were assumed to be white.

After 1960, when more minorities and women began winning, if we could not confirm a winner’s race through our methodology, we labeled the person “unknown.”

Please click here for a slideshow of the data.

To examine this data in more detail, explore this interactive graphic created by a group of Columbia Journalism School students in collaboration with CJR. 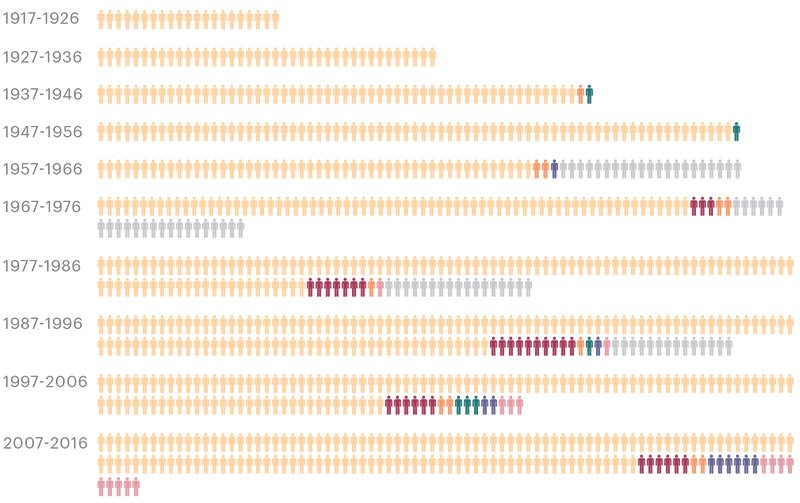 of Pulitzer winners over the last 100 years have been white, and Caucasians continue to dominate the Prizes. In the last decade, the percentage of white winners has hardly budged when compared to the 100-year figure.

The first non-white named Pulitzer winner was Gobind Behari Lal, an Indian-born science writer, who shared the 1937 Prize for reporting with John J. O’Neill, William L. Laurence, Howard W. Blakeslee, and David Dietz for stories about science at the 300th anniversary of Harvard University. Lal, who came to the US from India in 1912, was an independence activist in his native country, a science editor for Hearst newspapers, and one of the first newspaper reporters to write about cancer research. He also interviewed Albert Einstein, Enrico Fermi, and Mohandas Gandhi.

Only 30 named African Americans have won Pulitzers. The first was
Moneta Sleet Jr. of Ebony in 1969, for feature photography. The most recent, this year, was Farah Stockman of The Boston Globe, for commentary. 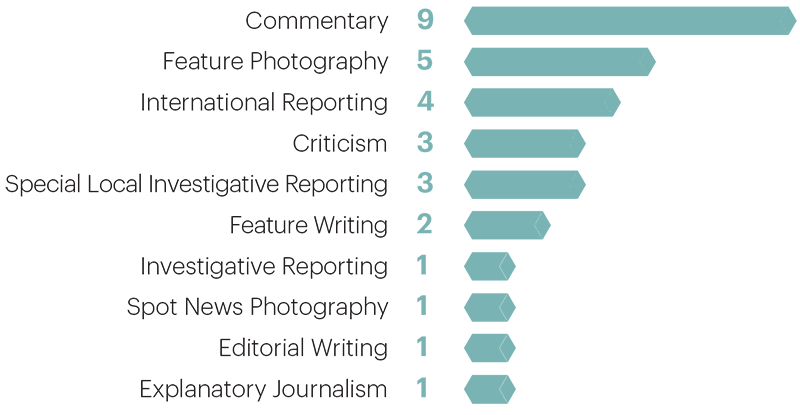 A boys’ club no more

The first woman to win the national reporting Prize was Lucinda Franks of United Press International, who shared the honor with Thomas Powers. Franks worked as a copy girl for UPI, later becoming the wire service’s first female reporter. Franks and Powers won the Prize in 1971 for a series on the life and death of Diana Oughton, a 28-year-old member of the Weathermen. of Prizewinners over the last century have been women, but that is changing. In the last decade, women have taken home nearly a third of journalism Prizes.

The first woman to win a Pulitzer was Minna Lewinson, a Columbia Journalism School student who shared the Newspaper History Award with fellow student Henry Beetle Hough in 1918, the only year a Prize was awarded in that category. The next was Anne O’Hare McCormick of The New York Times, who won the 1937 Prize in correspondence. The British-born McCormick began filing dispatches while accompanying her husband, an importer, on buying trips in Europe. She interviewed Winston Churchill, Adolf Hitler, and Benito Mussolini, and was the first woman to serve on the Times editorial board. “In the course of her brilliant newspaper career she became the expert the experts looked up to,” the Times wrote when she died.

The demise of small and mid-size newspapers coupled with the growth of national outlets has led to a concentration of Prize power among the field’s leaders. In the decade that ended 40 years ago, The New York Times won 6.8 percent of Pulitzers. In the last 10 years, the paper’s share has more than doubled, to 16 percent.

Some early public service citations carry a whiff of advocacy. The Milwaukee Journal won the 1919 Prize for “its strong and courageous campaign for Americanism in a constituency where foreign elements made such a policy hazardous from a business point of view.” In 1924, Joseph Pulitzer’s New York World won the public service Prize for “its work in connection with the exposure of the Florida peonage evil.” Around the world in a century A note on methodology: To tabulate international Pulitzers over 100 years, we included not only winners of the international reporting Prize, which has existed since 1948, but also winners in correspondence (1929-47), telegraphic reporting—international (1942-47), and reporting (1917-1947) when the topics were international.

If it bleeds, it leads Africa watchers have long said that the continent only makes news as a site of war, famine, and disease. The Prizes for Africa coverage make that point starkly, with small exceptions for political strife, human rights, and daily life. Stories about economics and business, diplomacy, corruption, justice systems, and other topics in Africa don’t win Pulitzers—at least not yet. Despite its prominence, theater criticism has won only one Pulitzer in the last century. Only two Pulitzers have been awarded for dance criticism, both to writers from The Washington Post.

Correction: After publishing our findings on May 31, we discovered inconsistencies with the way some of our data was entered and categorized, which resulted in a number of errors in our dataset. These errors do not affect our overall key findings, which analyze more than 1,000 data points; all of our results have since been updated and corrected online. The errors we found were due to three main factors: 1) There are discrepancies in the way Public Service winners are named by the Pulitzer Prize office, leading us to not count some individual winners for that Prize. 2) There were typos within our dataset, as well as inconsistent naming conventions, some of which were a result of publications’ names changing over time–this resulted in some categories being tallied incorrectly. 3) In a few instances, we mistakenly named people as winners who did not win a Prize, but who were closely involved with winning work. We regret the errors.